Featured Article: Is it Time for an Interagency Goldwater-Nichols Act? 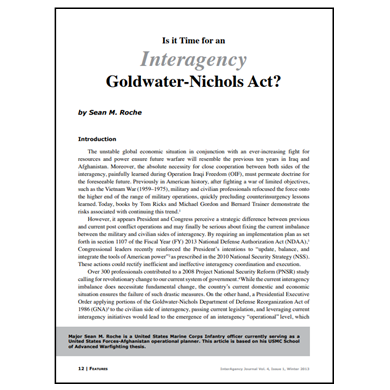 Is it Time for an Interagency Goldwater-Nichols Act?
by Sean M. Roche 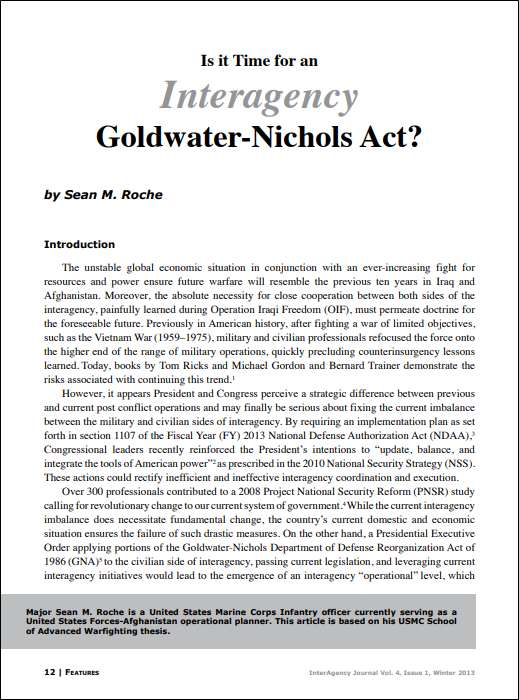 The unstable global economic situation in conjunction with an ever-increasing fight for resources and power ensure future warfare will resemble the previous ten years in Iraq and Afghanistan. Moreover, the absolute necessity for close cooperation between both sides of the interagency, painfully learned during Operation Iraqi Freedom (OIF), must permeate doctrine for the foreseeable future. Previously in American history, after fighting a war of limited objectives, such as the Vietnam War (1959–1975), military and civilian professionals refocused the force onto the higher end of the range of military operations, quickly precluding counterinsurgency lessons learned. Today, books by Tom Ricks and Michael Gordon and Bernard Trainer demonstrate the risks associated with continuing this trend.

However, it appears President and Congress perceive a strategic difference between previous and current post conflict operations and may finally be serious about fixing the current imbalance between the military and civilian sides of interagency. By requiring an implementation plan as set forth in section 1107 of the Fiscal Year (FY) 2013 National Defense Authorization Act (NDAA), Congressional leaders recently reinforced the President’s intentions to “update, balance, and integrate the tools of American power” as prescribed in the 2010 National Security Strategy (NSS). These actions could rectify inefficient and ineffective interagency coordination and execution.

Over 300 professionals contributed to a 2008 Project National Security Reform (PNSR) study calling for revolutionary change to our current system of government. While the current interagency imbalance does necessitate fundamental change, the country’s current domestic and economic situation ensures the failure of such drastic measures. On the other hand, a Presidential Executive Order applying portions of the Goldwater-Nichols Department of Defense Reorganization Act of 1986 (GNA) to the civilian side of interagency, passing current legislation, and leveraging current interagency initiatives would lead to the emergence of an interagency “operational” level, which would facilitate an evolutionary solution to the problem….

Is it Time for an Interagency Goldwater-Nichols Act? PDF