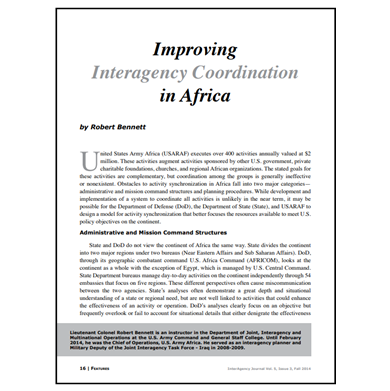 United States Army Africa (USARAF) executes over 400 activities annually valued at $2 million. These activities augment activities sponsored by other U.S. government, private charitable foundations, churches, and regional African organizations. The stated goals for these activities are complementary, but coordination among the groups is generally ineffective or nonexistent. Obstacles to activity synchronization in Africa fall into two major categories— administrative and mission command structures and planning procedures. While development and implementation of a system to coordinate all activities is unlikely in the near term, it may be possible for the Department of Defense (DoD), the Department of State (State), and USARAF to design a model for activity synchronization that better focuses the resources available to meet U.S. policy objectives on the continent.

State and DoD do not view the continent of Africa the same way. State divides the continent into two major regions under two bureaus (Near Eastern Affairs and Sub Saharan Affairs). DoD, through its geographic combatant command U.S. Africa Command (AFRICOM), looks at the continent as a whole with the exception of Egypt, which is managed by U.S. Central Command. State Department bureaus manage day-to-day activities on the continent independently through 54 embassies that focus on five regions. These different perspectives often cause miscommunication between the two agencies. State’s analyses often demonstrate a great depth and situational understanding of a state or regional need, but are not well linked to activities that could enhance the effectiveness of an activity or operation. DoD’s analyses clearly focus on an objective but frequently overlook or fail to account for situational details that either denigrate the effectiveness of an activity or cause it to fail…