Featured Article: Plutonium and Picasso – A Typology of Nuclear and Fine Art Smuggling 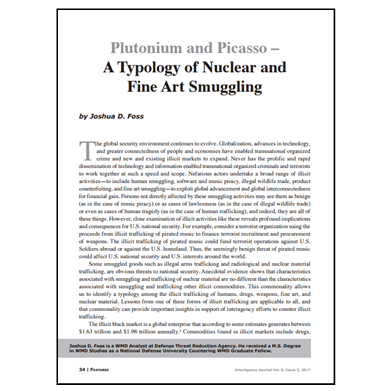 Plutonium and Picasso – A Typology of Nuclear and Fine Art Smuggling
by Joshua D. Foss 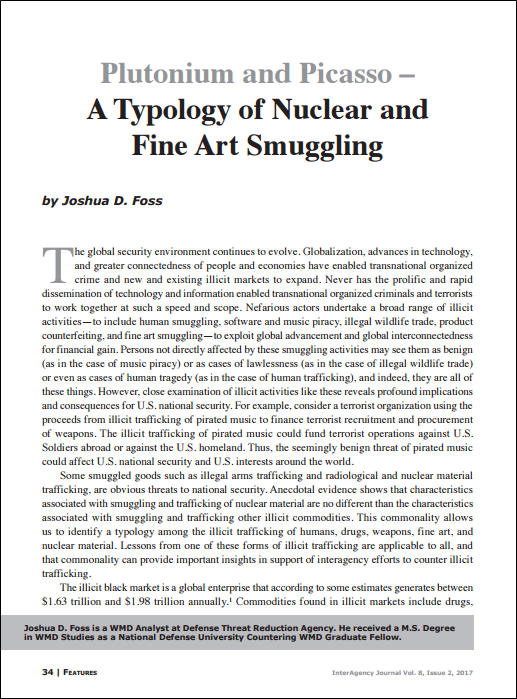 The global security environment continues to evolve. Globalization, advances in technology, and greater connectedness of people and economies have enabled transnational organized crime and new and existing illicit markets to expand. Never has the prolific and rapid dissemination of technology and information enabled transnational organized criminals and terrorists to work together at such a speed and scope. Nefarious actors undertake a broad range of illicit activities—to include human smuggling, software and music piracy, illegal wildlife trade, product counterfeiting, and fine art smuggling—to exploit global advancement and global interconnectedness for financial gain. Persons not directly affected by these smuggling activities may see them as benign (as in the case of music piracy) or as cases of lawlessness (as in the case of illegal wildlife trade)
or even as cases of human tragedy (as in the case of human trafficking), and indeed, they are all of these things. However, close examination of illicit activities like these reveals profound implications and consequences for U.S. national security. For example, consider a terrorist organization using the proceeds from illicit trafficking of pirated music to finance terrorist recruitment and procurement of weapons. The illicit trafficking of pirated music could fund terrorist operations against U.S. Soldiers abroad or against the U.S. homeland. Thus, the seemingly benign threat of pirated music could affect U.S. national security and U.S. interests around the world.