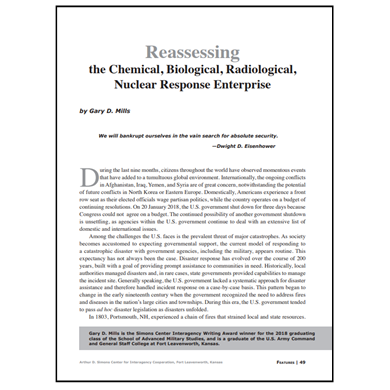 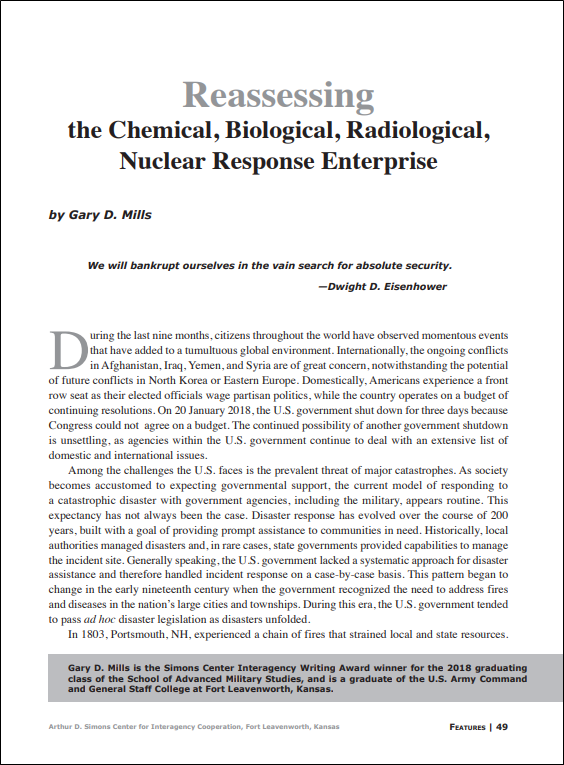 We will bankrupt ourselves in the vain search for absolute security.

During the last nine months, citizens throughout the world have observed momentous events that have added to a tumultuous global environment. Internationally, the ongoing conflicts in Afghanistan, Iraq, Yemen, and Syria are of great concern, notwithstanding the potential of future conflicts in North Korea or Eastern Europe. Domestically, Americans experience a front row seat as their elected officials wage partisan politics, while the country operates on a budget of continuing resolutions. On 20 January 2018, the U.S. government shut down for three days because Congress could not agree on a budget. The continued possibility of another government shutdown is unsettling, as agencies within the U.S. government continue to deal with an extensive list of domestic and international issues.

Among the challenges the U.S. faces is the prevalent threat of major catastrophes. As society becomes accustomed to expecting governmental support, the current model of responding to a catastrophic disaster with government agencies, including the military, appears routine. This expectancy has not always been the case. Disaster response has evolved over the course of 200 years, built with a goal of providing prompt assistance to communities in need. Historically, local authorities managed disasters and, in rare cases, state governments provided capabilities to manage the incident site. Generally speaking, the U.S. government lacked a systematic approach for disaster assistance and therefore handled incident response on a case-by-case basis. This pattern began to change in the early nineteenth century when the government recognized the need to address fires and diseases in the nation’s large cities and townships. During this era, the U.S. government tended to pass ad hoc disaster legislation as disasters unfolded…

One thought on “Featured Article: Reassessing the CBRN Response Enterprise”

One thought on “Featured Article: Reassessing the CBRN Response Enterprise”