Featured Article: Ripples in the Pond… 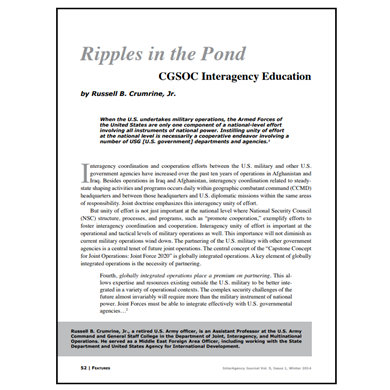 Ripples in the Pond: CGSOC Interagency Education
by Russell B. Crumrine, Jr.

When the U.S. undertakes military operations, the Armed Forces of the United States are only one component of a national-level effort involving all instruments of national power. Instilling unity of effort at the national level is necessarily a cooperative endeavor involving a number of [U.S. government] departments and agencies.

Interagency coordination and cooperation efforts between the U.S. military and other U.S. government agencies have increased over the past ten years of operations in Afghanistan and Iraq. Besides operations in Iraq and Afghanistan, interagency coordination related to steady-state shaping activities and programs occurs daily within geographic combatant command (CCMD) headquarters and between those headquarters and U.S. diplomatic missions within the same areas of responsibility. Joint doctrine emphasizes this interagency unity of effort.

But unity of effort is not just important at the national level where National Security Council (NSC) structure, processes, and programs, such as “promote cooperation,” exemplify efforts to foster interagency coordination and cooperation. Interagency unity of effort is important at the operational and tactical levels of military operations as well. This importance will not diminish as current military operations wind down. The partnering of the U.S. military with other government agencies is a central tenet of future joint operations. The central concept of the “Capstone Concept for Joint Operations: Joint Force 2020” is globally integrated operations. A key element of globally integrated operations is the necessity of partnering…