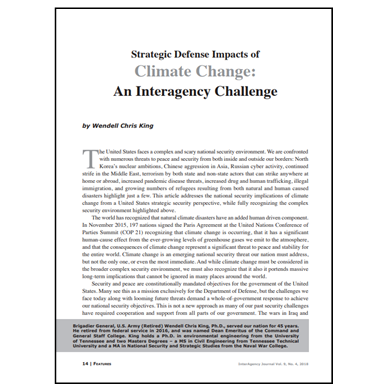 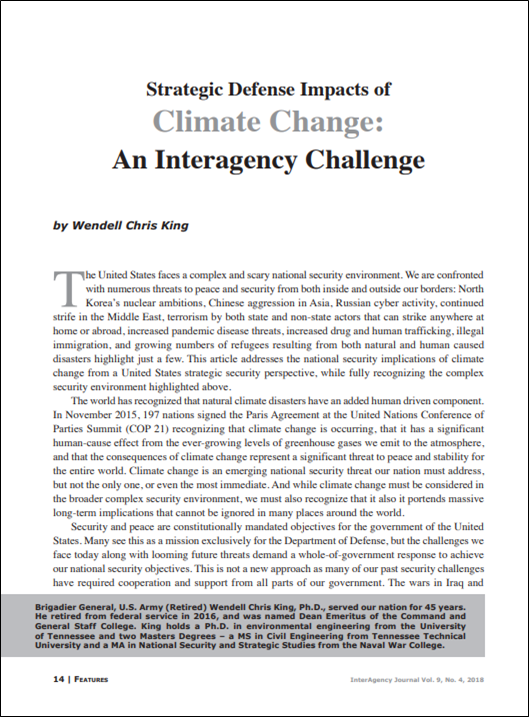 The United States faces a complex and scary national security environment. We are confronted with numerous threats to peace and security from both inside and outside our borders: North Korea’s nuclear ambitions, Chinese aggression in Asia, Russian cyber activity, continued strife in the Middle East, terrorism by both state and non-state actors that can strike anywhere at home or abroad, increased pandemic disease threats, increased drug and human trafficking, illegal immigration, and growing numbers of refugees resulting from both natural and human caused disasters highlight just a few. This article addresses the national security implications of climate change from a United States strategic security perspective, while fully recognizing the complex security environment highlighted above.

The world has recognized that natural climate disasters have an added human driven component. In November 2015, 197 nations signed the Paris Agreement at the United Nations Conference of Parties Summit (COP 21) recognizing that climate change is occurring, that it has a significant human-cause effect from the ever-growing levels of greenhouse gases we emit to the atmosphere, and that the consequences of climate change represent a significant threat to peace and stability for the entire world. Climate change is an emerging national security threat our nation must address, but not the only one, or even the most immediate. And while climate change must be considered in the broader complex security environment, we must also recognize that it also it portends massive long-term implications that cannot be ignored in many places around the world…