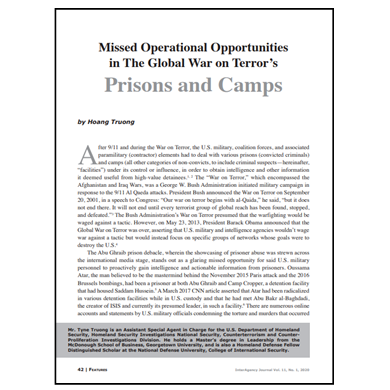 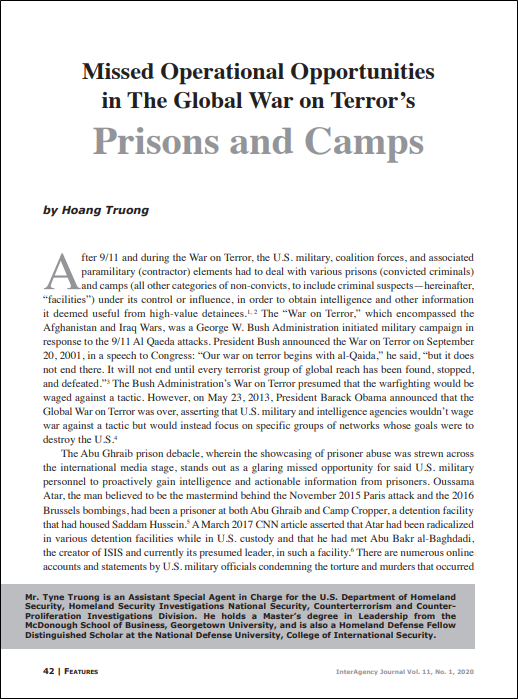 After 9/11 and during the War on Terror, the U.S. military, coalition forces, and associated paramilitary (contractor) elements had to deal with various prisons (convicted criminals) and camps (all other categories of non-convicts, to include criminal suspects—hereinafter, “facilities”) under its control or influence, in order to obtain intelligence and other information it deemed useful from high-value detainees. The “War on Terror,” which encompassed the Afghanistan and Iraq Wars, was a George W. Bush Administration initiated military campaign in response to the 9/11 Al Qaeda attacks. President Bush announced the War on Terror on September 20, 2001, in a speech to Congress: “Our war on terror begins with al-Qaida,” he said, “but it does not end there. It will not end until every terrorist group of global reach has been found, stopped, and defeated.” The Bush Administration’s War on Terror presumed that the warfighting would be waged against a tactic. However, on May 23, 2013, President Barack Obama announced that the Global War on Terror was over, asserting that U.S. military and intelligence agencies wouldn’t wage war against a tactic but would instead focus on specific groups of networks whose goals were to destroy the U.S.

The Abu Ghraib prison debacle, wherein the showcasing of prisoner abuse was strewn across the international media stage, stands out as a glaring missed opportunity for said U.S. military personnel to proactively gain intelligence and actionable information from prisoners. Oussama Atar, the man believed to be the mastermind behind the November 2015 Paris attack and the 2016 Brussels bombings, had been a prisoner at both Abu Ghraib and Camp Cropper, a detention facility that had housed Saddam Hussein. A March 2017 CNN article asserted that Atar had been radicalized in various detention facilities while in U.S. custody and that he had met Abu Bakr al-Baghdadi, the creator of ISIS and currently its presumed leader, in such a facility. There are numerous online accounts and statements by U.S. military officials condemning the torture and murders that occurred at Abu Ghraib and specifically, how these tortures either set back U.S. and coalition forces’ ability to legitimate its continued participation in Afghanistan, Iraq, and associated regions or even worse, strengthened the resolve of terrorist organizations such as ISIS and Al Qaeda…