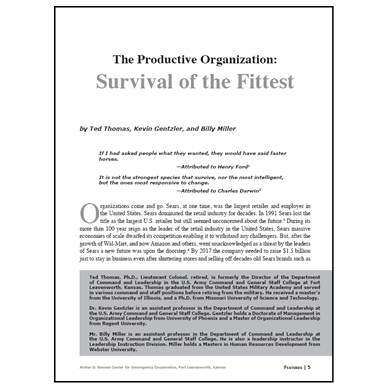 The Productive Organization: Survival of the Fittest
by Ted Thomas, Kevin Gentzler, and Billy Miller 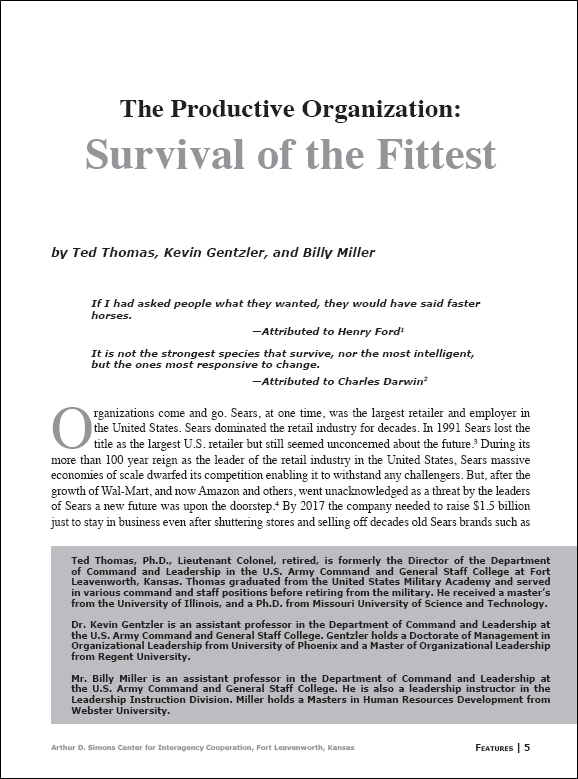 Organizations come and go. Sears, at one time, was the largest retailer and employer in the United States. Sears dominated the retail industry for decades. In 1991 Sears lost the title as the largest U.S. retailer but still seemed unconcerned about the future. During its more than 100 year reign as the leader of the retail industry in the United States, Sears massive economies of scale dwarfed its competition enabling it to withstand any challengers. But, after the growth of Wal-Mart, and now Amazon and others, went unacknowledged as a threat by the leaders of Sears a new future was upon the doorstep. By 2017 the company needed to raise $1.5 billion just to stay in business even after shuttering stores and sell of decades old Sears brands such as Craftsmen tools. Between 2010 and 2019 Sears lost $1 billion annually.

Eddie Lampert, the billionaire hedge fund manager became majority owner of Kmart, combined Kmart with Sears in 2005 to create the largest retail merger of its time. His goal was to better compete with Walmart and Home Depot and keep Sears competitive within the changing retail industry. Part of Lampert’s change plan was to turn Sears and Kmart into a tech company to compete with upstarts and other rapidly growing companies. Instead of turning the business around, he secluded himself from the rank and file, took briefings over video teleconferences, would not invest in the company’s core brands, and developed a vision and direction that neither customers nor employees believed in. In only a few short years Sears, a 100+ year old icon of America and long time industry leader, came to a breaking point. Sears leaders failed to efficiently and effectively respond to challengers, changes in the marketplace and correct an errant and failing strategy. These missteps eventually pushed the company to bankruptcy and the complete downfall of the one-time king of retail…

The Productive Organization: Survival of the Fittest PDF