Featured Article: The Unjustness of the Current Incantation of Jus Post Bellum 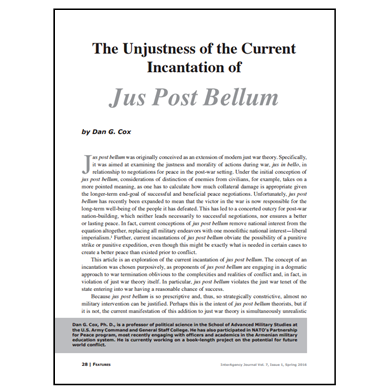 The Unjustness of the Current Incantation of Jus Post Bellum
by Dan G. Cox

Jus post bellum was originally conceived as an extension of modern just war theory. Specifically, it was aimed at examining the justness and morality of actions during war, jus in bello, in relationship to negotiations for peace in the post-war setting. Under the initial conception of jus post bellum, considerations of distinction of enemies from civilians, for example, takes on a more pointed meaning, as one has to calculate how much collateral damage is appropriate given the longer-term end-goal of successful and beneficial peace negotiations. Unfortunately, jus post bellum has recently been expanded to mean that the victor in the war is now responsible for the long-term well-being of the people it has defeated. This has led to a concerted outcry for post-war nation-building, which neither leads necessarily to successful negotiations, nor ensures a better or lasting peace. In fact, current conceptions of jus post bellum remove national interest from the equation altogether, replacing all military endeavors with one monolithic national interest—liberal imperialism. Further, current incantations of jus post bellum obviate the possibility of a punitive strike or punitive expedition, even though this might be exactly what is needed in certain cases to create a better peace than existed prior to conflict.

The Unjustness of the Current Incantation of Jus Post Bellum PDF