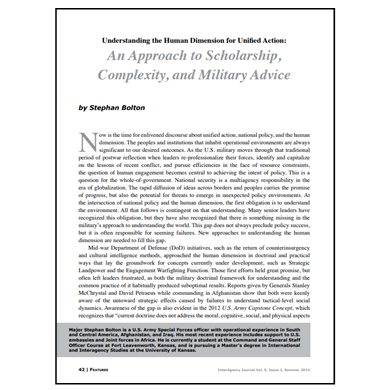 Understanding the Human Dimension for Unified Action:
An Approach to Scholarship, Complexity, and Military Advice
by Stephan Bolton 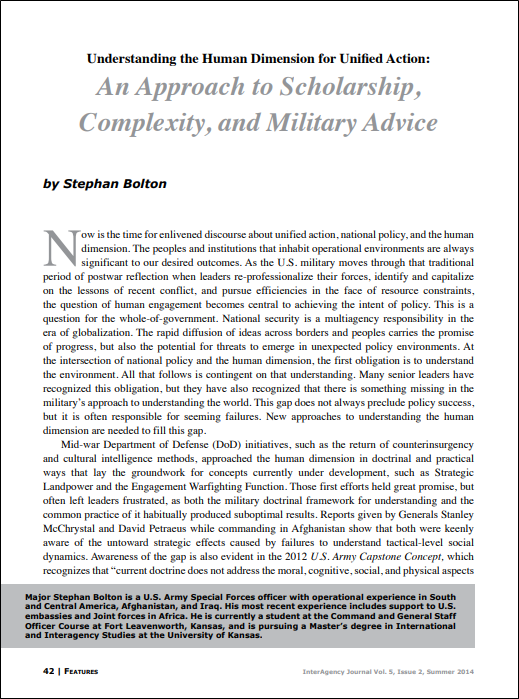 Now is the time for enlivened discourse about unified action, national policy, and the human dimension. The peoples and institutions that inhabit operational environments are always significant to our desired outcomes. As the U.S. military moves through that traditional period of postwar reflection when leaders re-professionalize their forces, identify and capitalize on the lessons of recent conflict, and pursue efficiencies in the face of resource constraints, the question of human engagement becomes central to achieving the intent of policy. This is a question for the whole-of-government. National security is a multiagency responsibility in the era of globalization. The rapid diffusion of ideas across borders and peoples carries the promise of progress, but also the potential for threats to emerge in unexpected policy environments. At the intersection of national policy and the human dimension, the first obligation is to understand the environment. All that follows is contingent on that understanding. Many senior leaders have recognized this obligation, but they have also recognized that there is something missing in the military’s approach to understanding the world. This gap does not always preclude policy success, but it is often responsible for seeming failures. New approaches to understanding the human dimension are needed to fill this gap.

Mid-war Department of Defense (DoD) initiatives, such as the return of counterinsurgency and cultural intelligence methods, approached the human dimension in doctrinal and practical ways that lay the groundwork for concepts currently under development, such as Strategic Landpower and the Engagement Warfighting Function. Those first efforts held great promise, but often left leaders frustrated, as both the military doctrinal framework for understanding and the common practice of it habitually produced suboptimal results. Reports given by Generals Stanley McChrystal and David Petraeus while commanding in Afghanistan show that both were keenly aware of the untoward strategic effects caused by failures to understand tactical-level social dynamics…

Understanding the Human Dimension for Unified Action: An Approach to Scholarship, Complexity, and Military Advice PDF