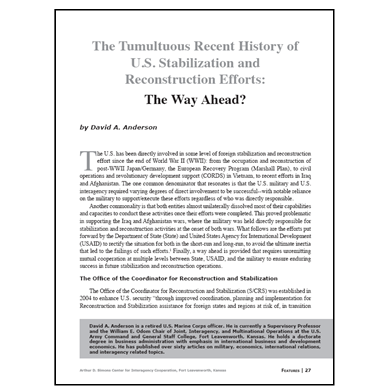 The Tumultuous Recent History of U.S. Stabilization and Reconstruction Efforts: The Way Ahead?
by David A. Anderson 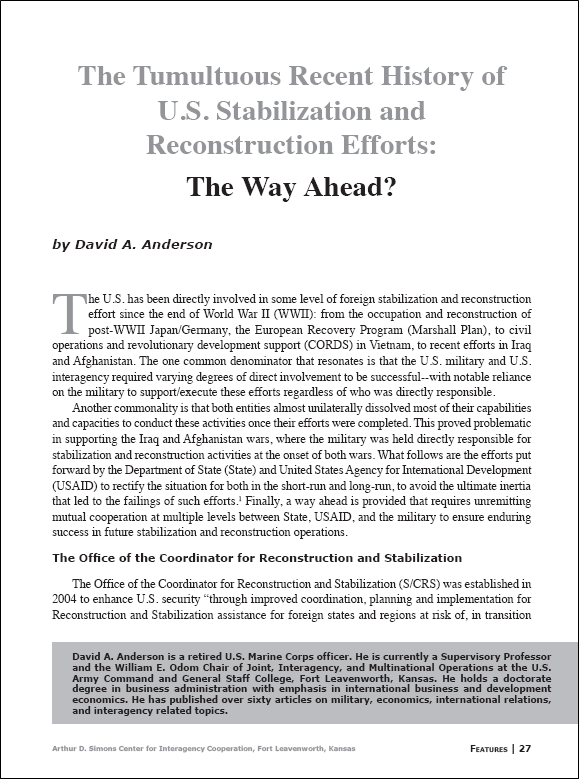 The U.S. has been directly involved in some level of foreign stabilization and reconstruction effort since the end of World War II (WWII): from the occupation and reconstruction of post-WWII Japan/Germany, the European Recovery Program (Marshall Plan), to civil operations and revolutionary development support (CORDS) in Vietnam, to recent efforts in Iraq and Afghanistan. The one common denominator that resonates is that the U.S. military and U.S. interagency required varying degrees of direct involvement to be successful–with notable reliance on the military to support/execute these efforts regardless of who was directly responsible.

Another commonality is that both entities almost unilaterally dissolved most of their capabilities and capacities to conduct these activities once their efforts were completed. This proved problematic in supporting the Iraq and Afghanistan wars, where the military was held directly responsible for stabilization and reconstruction activities at the onset of both wars. What follows are the efforts put forward by the Department of State (State) and United States Agency for International Development (USAID) to rectify the situation for both in the short-run and long-run, to avoid the ultimate inertia that led to the failings of such efforts. Finally, a way ahead is provided that requires unremitting mutual cooperation at multiple levels between State, USAID, and the military to ensure enduring success in future stabilization and reconstruction operations.

The Tumultuous Recent History of U.S. Stabilization and Reconstruction Efforts: The Way Ahead? PDF