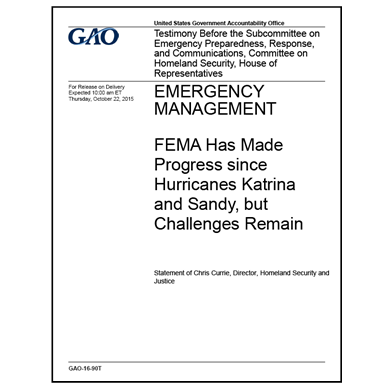 Last week the Government Accountability Office (GAO) released their testimony on the progress made by the Federal Emergency Management Agency (FEMA) since Hurricanes Katrina and Sandy. The testimony is based on previous GAO reports that were issued between 2012 and 2015, and audits the progress FEMA has made in national preparedness, disaster response and recovery, and other FEMA management areas.

In their testimony, GAO highlights progress and challenges in FEMA’s national preparedness efforts, noting FEMA’s response to GAO’s discovery that emergency support function coordinators were inconsistently carrying out their emergency response preparedness activities due to a lack of guidance from relevant federal departments. GAO also found that, while federal departments had identified emergency response capability gaps through exercises, real-world incidents, and other assessments, the status of federal interagency implementation of these actions is not comprehensively collected by or reported to the Department of Homeland Security or FEMA. As a result, the DHS’s and FEMA’s ability to assess and report on the nation’s overall preparedness was hampered. GAO also cited problems with FEMA’s plan to lead interagency actions to identify and address capability gaps in the nation’s preparedness to respond to improvised nuclear device. GAO recommended that FEMA, in collaboration with other federal agencies, regularly report on the status of corrective actions to close these gaps, and FEMA is now taking action to address the issue.

The testimony also reviewed FEMA’s work on disaster response and recovery programs as well as steps taken to strengthen many of its management areas. 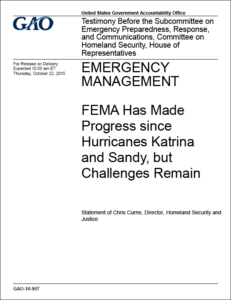 For more information on GAO-16-90T, please follow the link below.
GAO-16-90T, Emergency Management: FEMA Has Made Progress since Hurricanes Katrina and Sandy, but Challenges Remain