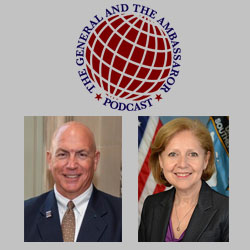 This month “The General and the Ambassador: A Conversation” dropped another two-part interview, this time featuring guests Admiral Kurt Tidd and Ambassador Liliana Ayalde. The two joined Ambassador (retired) Deborah McCarthy for discussions about the United States’s role in Latin America and the Caribbean.

Part one centers on Tidd and Ayalde’s partnership with USSOUTHCOM and their relationships with nations in the region. In this part of the interview, McCarthy and her guests discuss shifting military and diplomatic focus from drugs to global criminal networks, partnering with Colombia, the challenge of Brazil, and re-engaging with Ecuador.

The interviews are part of Ambassador McCarthy’s podcast series “The General and the Ambassador: A Conversation.” The podcast promotes interagency cooperation and is produced by the American Academy of Diplomacy.