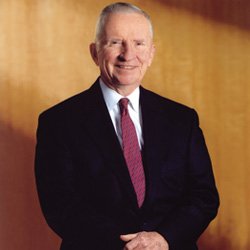 (Special report by Bob Ulin, Founding CEO) At a CGSC Foundation board of trustees meeting in 2007, Mark “Ranger” Jones told me that he knew Ross Perot and would make an introduction. Thus began a 2-year journey to cultivate a relationship with one of the world’s most interesting individuals. H. Ross Perot, left, and CGSC Foundation CEO Bob Ulin stand in front of a portrait of Col. Arthur D. “Bull” Simons in Perot’s office in Plano, Texas, during a visit in January 2010.

It all started with accepting Ranger Jones’ invitation to join him in attending the November 2007 Marine Corps birthday ball in New York City at which Mr. Perot was speaking. This was my opportunity to meet Mr. Perot and begin the long process of building a relationship. Over the next two years I traveled to New York, Washington, D.C. and Plano, Texas to meet with Mr. Perot and discuss his support for the College. On each occasion, I found him to be a friendly, warm, direct, and a thoroughly engaging personality. “What was he like?” I’m often asked. He was easy to speak with, determined, serious, a proud patriot and one who loved the military. In the summer of 2009, I visited Mr. Perot in his office in Plano, Texas along with Hyrum Smith, the foundation president, and Ranger Jones. We were there to inform him that we had selected him to receive the Foundation’s 2010 Distinguished Leadership Award. At that time, we invited him to visit the College in the new Lewis and Clark Center. When he came to CGSC in October 2009 and visited with students in the classroom, he was animated, engaging, and eager to share his views. This one-time candidate for President of the United States was completely at ease with military service members and found them “good company.” He loved being in the presence of “these young warriors.” Ross Perot takes a group photo after participating in class discussion with CGSC Professor Bud Meador and his students during his visit to the College Oct. 20, 2009.

Following that visit, Mr. Perot endowed a chair in ethics naming it after General Hugh Shelton, former chairman of the Joint Chiefs of Staff. He also provided start-up funding for the Col. Arthur D. Simons Center for the Study of Interagency Cooperation. Colonel Simons led Mr. Perot’s rescue of two of his employees from the prison in Tehran, Iran in 1979 – a bold and audacious move personally engineered by Mr. Perot.

The value of these gifts totaled $6.1 million. This donation was a game changer for the CGSC Foundation in just its third year of business.

We mourn the loss of Mr. Perot and express our condolences to his family and friends. The country has lost a great patriot, great entrepreneur, visionary, and thoroughly devoted friend of the military.

For a full obituary and details of his memorial visit www.rossperot.com/memorials.