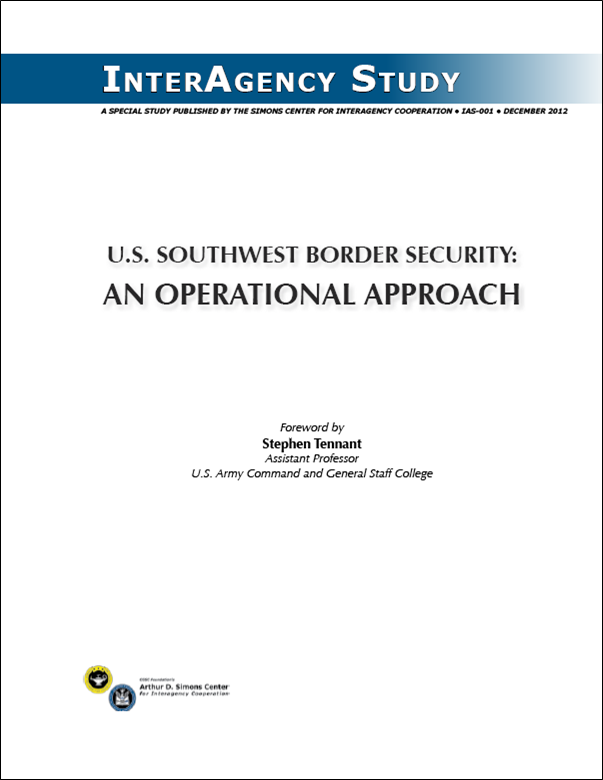 This study is the result of several months of academic research by a group of mid-career professionals participating in an alternative educational program with the U.S. Army Command and General Staff College (CGSC) that focused on issues related to the U.S. Southwest border.

During their studies, the authors examined the border region from various perspectives and applied selected tools of anthropology, physical and cultural geography, and military doctrine. In order to gain first-hand knowledge of the situation, the authors visited the border region, where they spoke with government officials, military professionals, and civilian academics interested in security and other issues. The authors also had the opportunity to interact with U.S. Senate staff members and executive branch officials engaged in writing policy, as well as staff from the U.S. Northern Command, Joint Task Force North, U.S. Customs and Border Protection, the Drug Enforcement Administration, and academics from the Strategic Studies Institute of the U.S. Army War College, the University of Kansas Center for Latin American Studies, the University of Texas at El Paso. They were also able to visit with students and faculty from the Mexican equivalent of CGSC.

This study begins with a broad view of border region issues before narrowing its focus to security and how DoD can support a whole of government approach to border security. The authors reviewed a wide range of topics that helped define the contextual environment of the border region, as well as issues that are viewed as problems by various actors or interests. The authors studied and discussed government policy documents and academic works related to politics, economics, geography, the history of Mexico, the political development of Mexico, immigration policy, bilateral diplomatic relations, the law and law enforcement at the border, civil and human rights concerns, various models of transnational criminal organizations and their activities, and critical-thinking and problem-solving techniques in preparing this study.

This study focuses on security at the U.S. Southwest border, and does not address in-depth concerns with immigration policy, economics, diplomacy, and law. As such, the study does not attempt to resolve the various issues involved with the U.S-Mexico border region.