Let’s not have to relearn a lesson learned 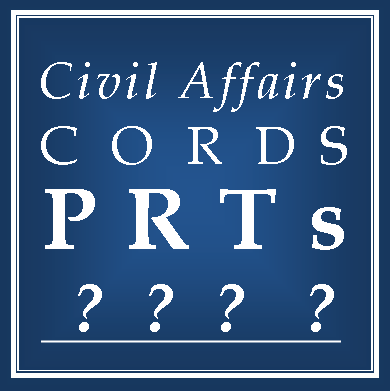 During World War II the United States understood it needed a capability that could occupy, control, and administer liberated by war torn areas of Europe. President Roosevelt, thus, directed the Army to organize, and train a civil administration capability able to assist with governance, security, and development. The Army gathered civilian experts from all corners of the government forming them into teams, and as combat forces seized ground and moved forward, they took over what today we refer to as stability and reconstruction operations. With the rapid demobilization after the war this capability was lost.

In Viet Nam, we again saw a need for such a capability, and President Johnson established the Civil Operations and Revolutionary Development Support (CORDS) program, appointing Robert Komer, who was then a member of the National Security Council, as its first director. CORDS mission was to unite the capabilities and activities of the military, State Department, U.S Agency for International Development (USAID), and CIA into a unified effort. Komer formed and deployed these interagency teams to every province in the country. With the U.S withdrawal from Viet Nam, this capability was demolished.

Initially in Afghanistan and then Iraq the need for this same capability once again became apparent. In 2002, under the leadership of the State Department, the first Provincial Reconstruction Team (PRT) was established in Afghanistan, growing eventually to 26 teams in total. Each team of between 80-100 individuals was led by a military officer with security forces and Civil Affairs specialists. Joining this team was one civilian representative from the State Department, USAID, and the Department of Agriculture. Depending on the specific requirements of each province, other agencies would be represented as well.

In 2005, the first PRT was deployed to Mosul in Iraq and at the program’s high point there were 25 teams throughout the country. Unlike Afghanistan, the Iraq PRTs were larger and almost entirely civilian, led by a senior State Department Foreign Service Officer and composed of teams from USAID, and the Departments of State, Justice, and Agriculture, plus contractors and Iraqi experts. Military participation was limited to the deputy leader, liaison officers, and Civil Affairs soldiers that performed various specialized tasks.

Like their predecessors in World War II and Viet Nam, PRTs had a mandate to improve security, support good governance, and promote social and economic development at the province and district level. They spearheaded projects promoting agricultural yields, construction of infrastructure, assisting local governments, training police, and establishing courts. They also were an extension of the Coalition Forces and U.S. embassy. In effect, PRTs were the U.S. government’s eyes and ears in every corner of the country representing U.S. interests and reporting on local conditions and political developments.

However, just like their predecessors PRTs have been relegated to the dustbin now as we’ve wound down military operations in Afghanistan and Iraq. To national security professionals of a certain age, this is a striking decision. We know the next time we deploy troops to a foreign country either for regime change, stabilization, reconstruction, or counterterrorism, we will once again need this capability. Why lose the processes, procedures, training, and experience we gained at such high cost only to have to recreate it next time? And there is always a next time.

The most often cited logic is that retaining PRT capabilities when they are not deployed and fully engaged is just too costly. This is especially true for the civilian agencies of government where performing core missions every day requires every person authorized by Congress. Those agencies cannot afford to assign personnel to an organization that is not contributing to the daily mission, and PRTs are not contributing to that mission every day. But could they?

To retain a valuable national security capability we know will be needed again, we need to think with a little innovation and creativity. At any point in time there are fragile and failing states, be it from corruption, autocratic rule, insurgency, famine, terrorism, or internecine feuds. This is true now and has been throughout history. The U.S. has important interests in some of those states. Why don’t we identify the five states in this category where our interests are the greatest and deploy a single PRT to each one?

These teams would be organized like those used in Iraq, led by a senior Foreign Service Officer with a military deputy, and comprised of an interagency cadre made up of representatives from USAID, Agriculture, Justice, Civil Affairs specialists, and others as the situation dictates. The PRTs would report to and be under the direction of the U.S. ambassador, deployed in the field away from the capital city, and conduct stabilization, reconstruction, development, and security operations based on the country plan developed by the embassy.

The benefits of this are numerous: they become the eyes and ears of the ambassador; support our national interests; provide the host nation with a needed capability; sustain and even refine the processes and procedures developed over the last 13 years; provide a deployed experience for many civilian professionals; enhance interagency cooperation throughout the executive branch as more people rotate through these inherently interagency teams; and preserve a capability we know will be needed in the future.

Let’s not have to relearn past lessons learned. Instead, let’s enhance our ability to advance our national interests today while retaining a capability for tomorrow.