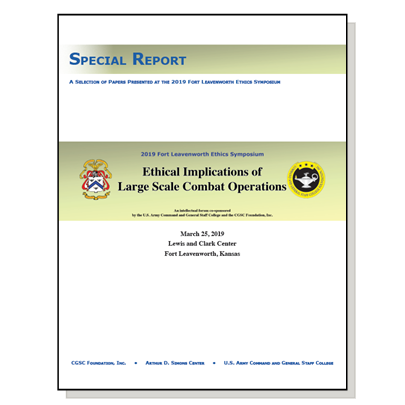 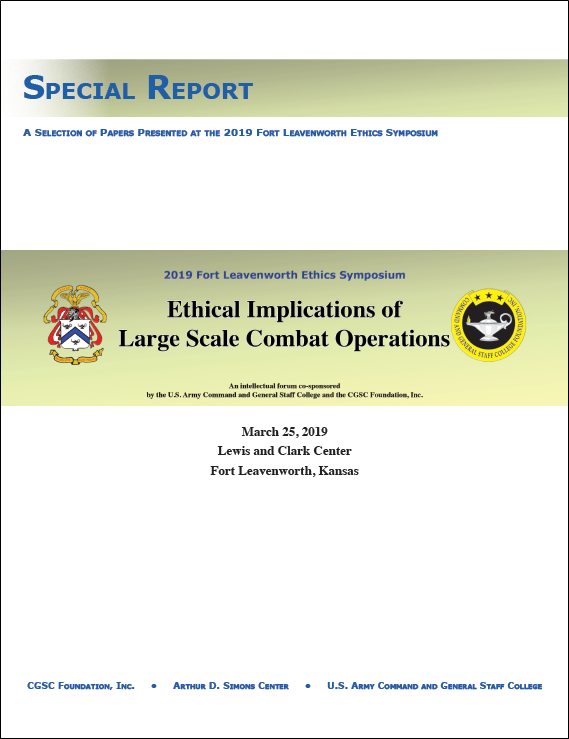 The 2019 Fort Leavenworth Ethics Symposium was conducted March 25, 2019, with the theme of “Ethical Implications of Large Scale Combat Operations.” The symposium included a variety of guest speakers, panel discussions, and paper presentations.

Over thirty papers were accepted for presentation at the symposium. This publication is a collection of sixteen of those papers, published as largely as submitted.

A Survey of Military Oaths in Russian History
by Shushanna Baumann

Can the United States Wage Existential Warfare Without Foundational Principles or Truths?
by Eric Dean

War Crimes in the Philippines during WWII
by Cecilia Gaerlan

The Military Officer in Moral Jeopardy or The Problem of Serving Under Unethical Senior Leaders: A Philosophical Essay
by Prisco R. Hernández, Ph.D.

Ours is to Reason Why: The Ethics of Tactical Risk Assessment in Large Scale Combat
by Trent J. Lythgoe

The Ethical Considerations of Unmasking Procedures
by Joshua A. Metz

“Plans from Hell”: Ethical Implications of the Third Reich’s Vision for War in the East
by Mark V. Montesclaros

Ready or Not (?) The Ethics of Time in Preparing for Large Scale Combat Operations: Navigate Chronos Lest We Die
by Samuel L. Rico