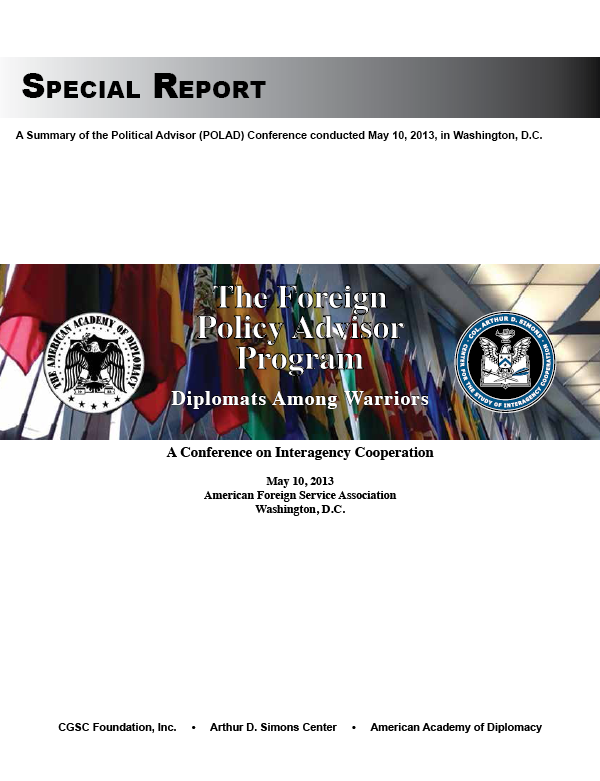 The Simons Center recently published a special report entitled The Foreign Policy Advisor Program: Diplomats Among Warriors, focuses on the role of the State Department Foreign Policy Advisor, or POLAD, who serve with the U.S. military. The report follows a May 2013 conference sponsored by the Simons Center and the American Academy of Diplomacy, and was hosted at the American Foreign Service Association.

The report discusses the POLAD program’s importance and growth – a 600% increase in seven years – and the importance of maintaining State and DoD relationships as a key part of the POLAD’s mission.Also covered in the report is the POLAD program’s role in greater whole-of-government integration; the program’s contribution to increased State-Defense understanding and coordination; selection and training of POLADS; role of the POLAD as part of the military commander’s special staff; and importance of personal “chemistry” in the POLAD-commander relationship. 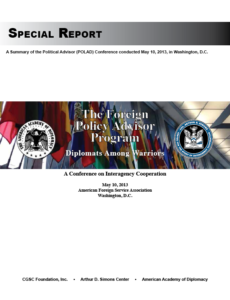 One thought on “Special Report: The Foreign Policy Advisor Program”

One thought on “Special Report: The Foreign Policy Advisor Program”