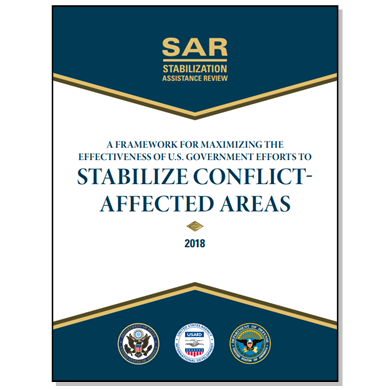 Recently, the U.S. Agency for International Development (USAID) and the Departments of Defense (DoD) and State published the Stabilization Assistance Review (SAR). The SAR was announced in April of this year and examines past challenges the U.S. government has faced in previous stabilization efforts.

The SAR aims to streamline U.S. government stabilization efforts and provide a framework for USAID, DoD, and State to better work together in the future. According to the SAR, going forward, the U.S. government will avoid “large-scale reconstruction efforts.” Instead, short-term missions that last between one and five years will be the goal, though the SAR states “There is no single set time frame for stabilization that is generalizable to all cases, but in no case should it be open-ended.”

The SAR also notes that there are a growing number of conflicts around the world that effect U.S. national security and economic interests, and incorporates eight case studies of past U.S. stabilization engagements, including Iraq, Afghanistan, Somalia, and Kosovo.