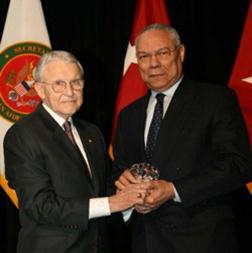 “General Powell is an exceptional leader and very deserving of this recognition,” said Lt. Gen. Robert Arter, who at the time was chairman of the board of trustees of the Command and General Staff College Foundation. “We are also honored to be able to sponsor the new lecture series in his name and believe it will be a great addition to the education of our officers at the College.”

“I am honored to receive this distinguished award,” said Powell. “I am even more honored and pleased to have a Chair and Lecture series named after me at the Command and General Staff College. The education I received 40 years ago at Fort Leavenworth was instrumental in allowing me to assume more important roles in our national security structure. I am confident the college will continue to do just that for future generations.”