The Office of the Director of National Intelligence (ODNI), the Department of Justice (DOJ), and the Department of Homeland Security (DHS) released an unclassified summary of the joint comprehensive threat assessment on domestic violent extremism (DVE) on March 17. 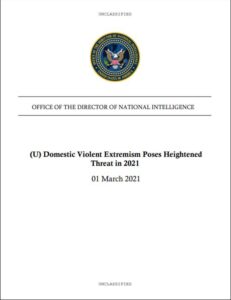 According to the unclassified summary, the Intelligence Community “assesses that domestic violent extremists who are motivated by a range of ideologies and galvanized by recent political and societal events in the United States pose an elevated threat to the Homeland in 2021.” The Intelligence Community also believes that lone offenders or small cells of DVEs are more likely to carry out violent attacks in the U.S. than larger violent extremist organizations, and that racially or ethnically motivated violent extremists and militia violent extremists present the most lethal DVE threats – conducting mass-casualty
attacks against civilians and targeting law enforcement and government personnel and facilities.

For the purposes of this assessment, the Intelligence Community defines a domestic violent extremist as an individual based and operating primarily in the U.S. without direction or inspiration from a foreign terrorist group or other foreign power and who seeks to further political or social goals wholly or in part through unlawful acts of force or violence.