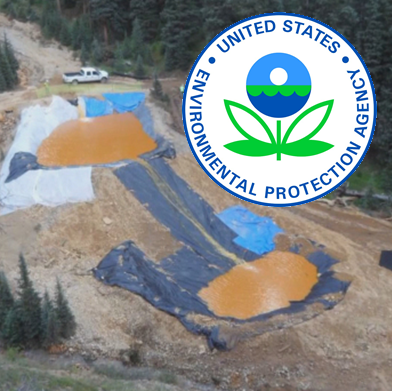 Ever heard of the Gold King Mine or the Animus River in Colorado? Well by now most Americans have. On August 5, 2015, a week ago today, the Environmental Protection Agency (EPA) was conducting an investigation of the long-closed mine to determine how to stop the slow release of contaminated water and prevent further environmental damage. In the process, the loose material containing the contaminate collapsed, releasing an estimated 3 million gallons of heavy metal laced water into Cement Creek, a tributary of the Animus River. The highly acidic waste water has already killed off fish in the headwaters.

The EPA has taken responsibility for the collapse and release, and deployed emergency teams to Colorado and, further downstream, New Mexico and the Navajo Nation. Reading their updates and press releases, the EPA enumerates their actions: declaring an emergency, responding rapidly, deploying assets, coordinating with local, state, and tribal entities. All the measures of performance you would expect. But if you watch, hear, or read news media accounts either very little is getting done or the public is not getting answers to their questions. Seems few, if anyone, is tracking measures of effectiveness.

Where is FEMA? Since Hurricane Katrina, FEMA has been transformed into highly professional response organization. As demonstrated in numerous large and small emergencies—the Gulf oil well blowout, the Joplin tornado, Superstorm Sandy—FEMA has proven the capability to respond rapidly, with overwhelming resources, in a very organized manner to coordinate the multitude of local, state, tribal, and federal agencies charged with dealing with emergencies. They have the authorities, relationships, processes, training, experience, and capacity to be effective.

FEMA works daily with emergency management offices and agencies within their regions. They regularly plan and conduct exercises with over a dozen federal agencies programmed to respond to their requirements. Responding to emergencies is their primary mission. They are organized, trained, and equipped for just that mission. The EPA is a regulatory agency with a limited emergency response capability.

With thousands of miles of riverbank exposed, probably thousands of wells effected, commercial enterprises impacted, agricultural interests, health concerns, and potential fish and wildlife devastated, why are we not calling this an emergency and deploying FEMA to coordinate the needed interagency response?

They are well experienced at assessing and processing claims. They can call on the U.S. Army Corps of Engineers—which has responsibility for the watershed—to model downstream effects and take mitigating actions. The military can deploy water purification teams to communities that no longer have access to drinking water. The entire federal-to-local interagency team responds to their direction and they can call on all relevant parts of it that need to respond in a unified, organized manner.

More importantly, FEMA operates by tracking measures of effectiveness. While it is important to track how many water quality experts and technicians have been deployed to which communities, where water samples are being taken, and how many state departments of fish and wildlife have been coordinated with, it is far more important to measure wells certified as clean, agricultural lands clear for use, number of persons and towns with access to potable water, claims payed out, and numerous other measures of how effective the emergency actions are performing.

We always face the possibilities of domestic emergencies, either natural or man-made. We have a highly professional federal agency dedicated to respond to them with all the authorities, processes, relationships, and experience needed to organize effectively the multitude of necessary agencies into a single unified effort. Let’s use them.