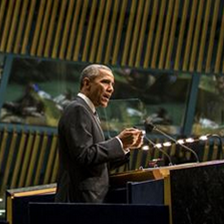 On September 28, President Obama addressed the United Nations (U.N.) General Assembly, where he urged a whole-of-government approach to international dilemmas. The president’s remarks touched on several international issues, including the Islamic State of Iraq and the Levant (ISIL), the Iran Nuclear Pact, and Russia’s annexation of Crimea.

President Obama stressed that military power is only part of a lasting solution to situations in Syria and around the world, encouraging greater diplomatic involvement of larger nations, and saying that “we will be stronger when we act together.”