Acting Secretary of the Army, Patrick J. Murphy, visited Kansas City on the evening of March 24, and met with a small group of KC business, community and veteran organization leaders in a gathering in the offices of Spencer Fane in downtown KC. The CGSC Foundation hosted the event along with Spencer Fane and the Global Town Hall.

During his remarks Secretary Murphy stressed three key points and emphatically asked that the members of the audience help the Army with communicating them. 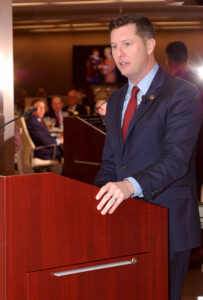 Acting Secretary of the Army Patrick Murphy speaks to attendees at the reception/dinner at the offices of Spencer Fane in downtown Kansas City, March 24. – Click the photo to see all the photos from the evening.

He first spoke about the Army’s business practices, which are key during these times of great change and budgetary constraints. He stressed that as business people, the members of the audience were in a unique position to help the Army with public-private partnerships. Murphy said that he learned during his time as a Congressman that the Department of Defense needed to improve their “auditability.” He pledged to get the Army into an auditable state by the end of 2016, even while retaining the readiness required to be the nation’s “9-1-1” force. He also mentioned Base Realignment and Closure (BRAC), and made the point that fully 20 percent of Army facilities were vacant and needed to be part of a BRAC process.

Secondly, Murphy addressed the need for a better handoff of veterans between the Army and the Veterans Administration/society. He said veterans were the Army’s spokespersons for many issues and the Army isn’t doing a good enough job with Soldiers’ transitioning to the VA and to society in general. He asked for the attendees’ help in this area.

As part of this conversation, which led to his request for the attendees in the room to help tell the Army story, Murphy mentioned “PTG”…that is, “Post Traumatic Growth,” versus the common misperceptions of PTSD. Murphy said that with 22 million veterans in the country, 9.5 million of which are Army veterans, there are numerous opportunities to tell the good news about them. He said veterans are generally more likely than their civilian counterparts to be employed, be involved in their communities and to vote. They also earn more than their civilian counterparts. Murphy said these were all facts that contribute to why there is a good story here – PTG vs. PTSD – that needs to be told. 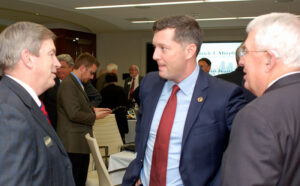 Murphy added to the stories of individual Soldiers/veterans the good that the Army has done in the world. – “Girls go to school in Afghanistan; the largest Muslim genocide in the world was halted in the Balkans…add to that if the Army were on the Fortune 500 list, it would be second on the list in terms of employee population and tenth in terms of budget.”

Murphy concluded his remarks for the evening by summarizing and reemphasizing his points, and stayed well after to converse and take photos with the attendees…all the while reminding everyone he needed them to help tell the Army story.

Prior to the evening event, Murphy had spent the day with Soldiers and leaders at Fort Riley and Fort Leavenworth. His next scheduled stop after Kansas City was Fort Leonard Wood, Mo.