The U.S. Army Command and General Staff College kicked off the 2016-2017 academic year with the traditional International Flag Ceremony for Command 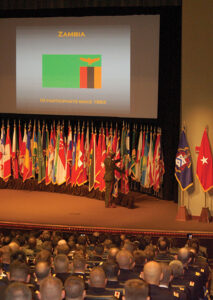 and General Staff Officer’s Course 2017 at 9:30 a.m. on Aug. 8 at Fort Leavenworth’s Lewis and Clark Center. The ceremony featured posting of the colors of all the nations represented by students attending this year’s class. Brig. Gen. John S. Kem, Provost of the Army University and Deputy Commandant of CGSC, was the host.

The international students in the class join more than 1,050 United States Army, Marine Corps, Navy, Air Force and Coast Guard officers for the 10-month class that graduates in June 2017. In addition, 11 civilians from U.S Government partner agencies and departments will attend the class. New for class 2017 will be four Department of the Army civilians. The course is designed to develop war-fighting and adaptive leadership skills necessary for military officers to be proficient in Unified Land Operations.

CGSC strives to be an educational center of excellence that is renowned in the study of leadership, the conduct of joint and combined land warfare, and the application of Joint, Interagency, Intergovernmental, and Multinational organizations to synchronize all elements of power to achieve national objectives. The College supports field commanders with well-trained and well-educated leaders, in-depth research in operational-level studies, and reach-back planning in support of ongoing operations.

For more information contact the Army University Public Affairs Office at (913) 684-5428 or ArmyU@mail.mil.