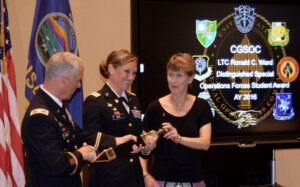 The award is presented to the top Special Operations Forces (SOF) student in each CGSOC class for achievement and academic excellence. Selection criteria for the award includes not only academic excellence in the CGSOC curriculum, but also high standards of character, intellect, professionalism and “SOF presence.” The award is named after CGSC faculty member and SOF officer Lt. Col. Ronald C. Ward, who had a distinguished 31-year career in the U.S. Army in Infantry and Special Forces units. Ward was killed in a lightweight sport aircraft accident Oct. 8, 2010, during his assignment to the SOF directorate of the Combined Arms Center at Fort Leavenworth.

The award in Ward’s honor was created in 2014 and dedicated to his memory by his family as a means to recognize SOF students long into the future. On behalf of his family, Ms. Beth Ward, Lt. Col. Ward’s wife at the time of his death, endowed the award through the CGSC Foundation. The award is a replica of a Roman Gladius sword with the recipient’s name engraved. In addition, a plaque describing the award with a list of all past recipients is in the SOF directorate offices on the third floor of the Lewis and Clark Center.

Maj. Moore graduated with the CGSOC Class of 2016 on June 10, and is enroute to her new assignment as the 4th Infantry Division Deputy G-9 (Civil Affairs). She is a graduate of the Air Force ROTC program at Georgia State University, receiving her commission as a second lieutenant as an Air Battle Manager. In 2006 she took advantage of the “Blue to Green” program and transferred to the U.S. Army as a first lieutenant in the Adjutant Generals Corps (human resources). After serving as an AG officer, first at Fort Jackson, S.C., then later at Fort Bragg, N.C., in the 1st Brigade of the 82nd Airborne Division, she transferred to the Civil Affairs branch. Upon completion of the Civil Affairs selection and qualification course in 2009, she was assigned as a team leader in the 92nd Civil Affairs Battalion (Airborne) at Fort Bragg. She deployed her team in 2012 to Afghanistan in support of Operation Enduring Freedom.

Upon returning to Fort Bragg, Moore was assigned as the Battalion Civil Information Manager and immediately deployed to Turkey in support of the U.S. Country Team and the U.S. Agency for International Development, and the Syria Transition Assistance Response Team. After this deployment she returned to Fort Bragg and served as the operations officer for the 92nd Civil Affairs Battalion where she served until her selection to attend the 2016 class of CGSOC.

Moore’s awards include a Bronze Star, Joint Service Commendation medal and a Joint Meritorious Unit Award, among others. She holds a bachelor’s in history and is currently pursuing a master’s in international relations.

The CGSC Foundation is honored to sponsor the LTC Ronald C. Ward Distinguished Special Operations Forces Student Award. We congratulate Maj. Moore and wish her well as she assumes her new duties at Fort Carson, Colo.