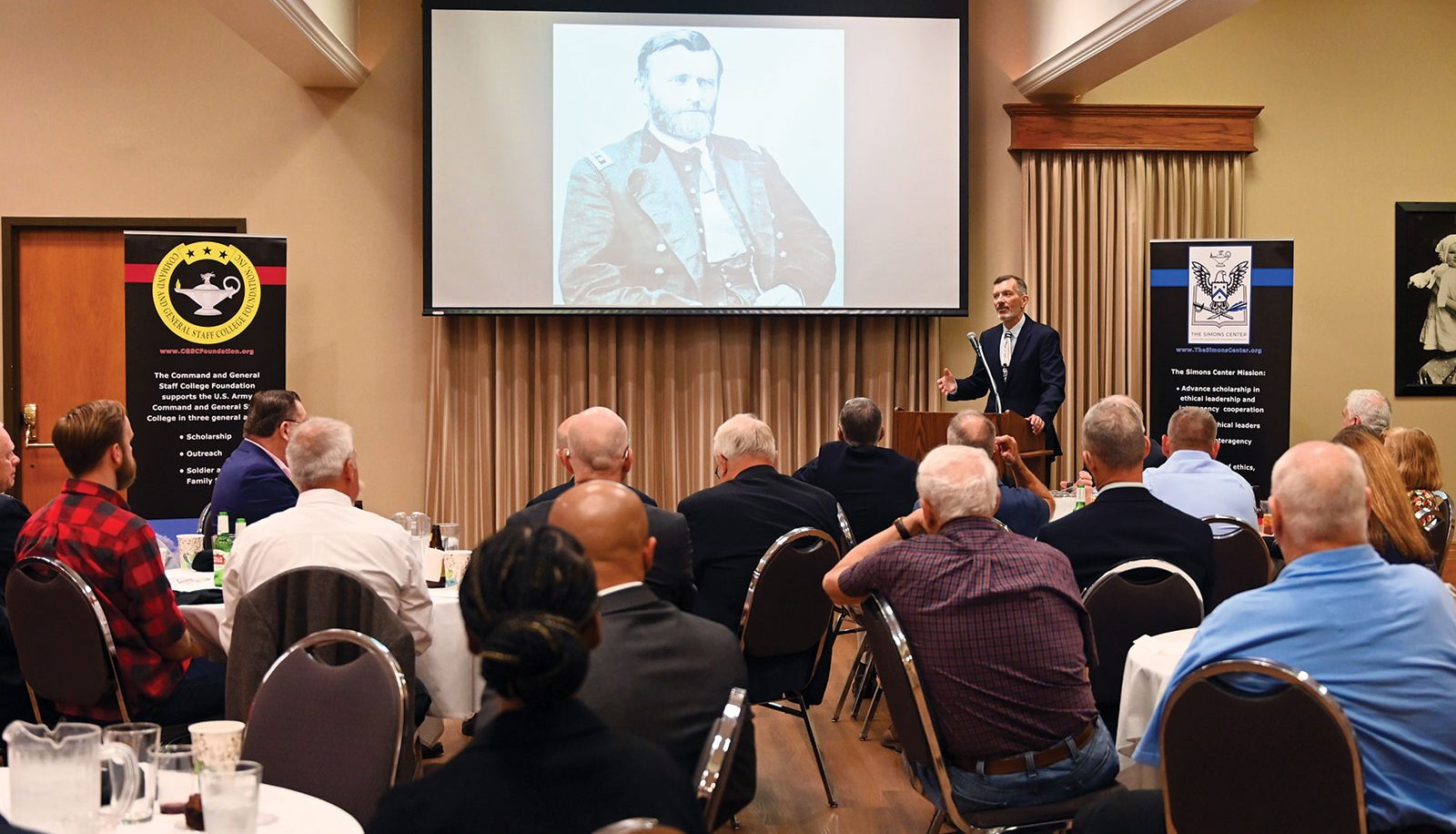 The CGSC Foundation and its Simons Center hosted the second lecture of the 2022 Distinguished Speaker Series at the Riverfront Community Center in downtown Leavenworth, Kansas on Sept. 21, 2022. In this installment of the series Dr. Harry S. Laver, professor of military history and the Maj. Gen. William A. Stofft Chair of Historical Research at the U.S. Army Command and General Staff College, discussed leader development through the lens of Gen. Ulysses S. Grant. 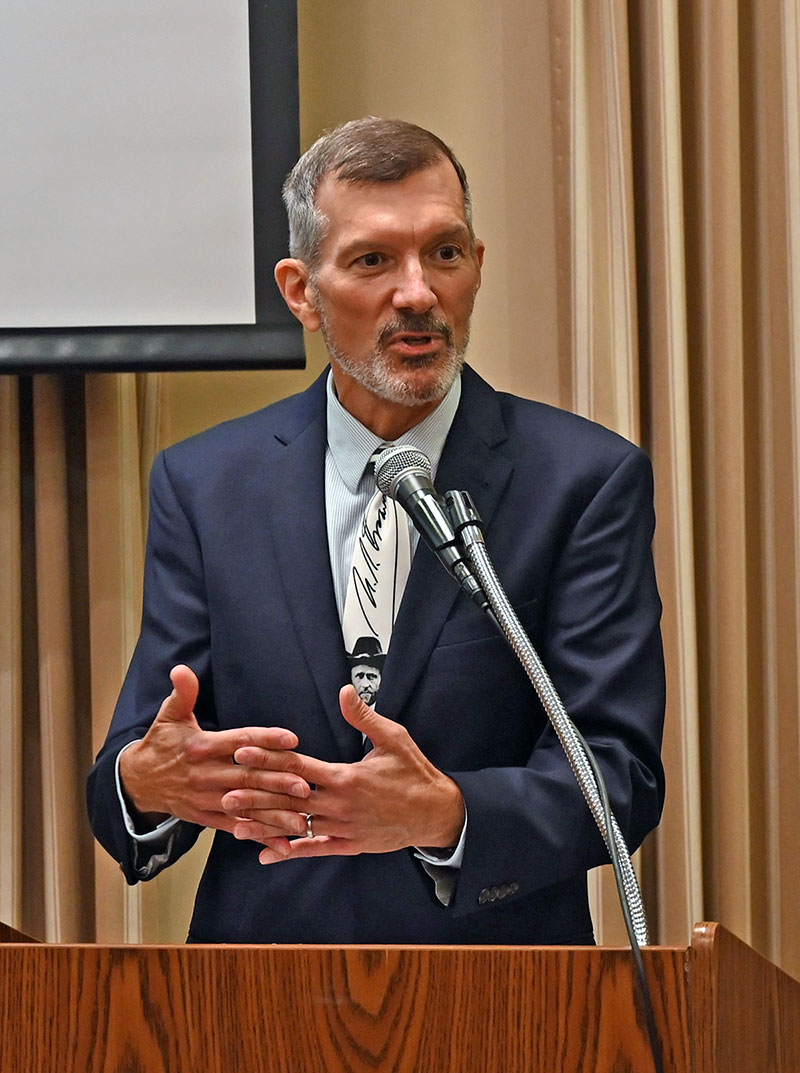 (Top photo and above) Dr. Harry S. Laver, professor of military history and the Maj. Gen. William A. Stofft Chair of Historical Research at the U.S. Army Command and General Staff College, delivers his presentation on Gen. U.S. Grant at the Distinguished Speaker Series event host by the CGSC Foundation and its Simons Center on Sept. 21, 2022, at the Riverfront Community Center in downtown Leavenworth, Kansas.

The evening began with a reception, followed by CGSC Foundation President/CEO Rod Cox making welcome remarks and inviting everyone to dinner. Toward the end of the dinner period Cox recognized the sponsors for the evening and introduced Laver.

Laver took to the lecture appropriately adorned with his Gen. Grant embossed tie and took the attendees on a journey of Grant’s life from an unfocused young boy to a highly successful strategic leader. Laver recounted Grant’s early failures, but how at the outset of the Civil War he rejoined the Army and became one of the great generals of the Civil War, if not one of the best in American history.

Laver led the audience through Grant’s victories in a succession of early battles, later several critical battles, and ultimately defeating Robert E. Lee. Despite his success, Laver made the point that Grant was not born a great commander, and in his early battles he made a number of significant mistakes. Rather than being blessed with an innate ability to command, Grant had to learn the art of command. He developed his leadership through experience in his early battles, being mentored by others, and making a conscious and deliberate effort to improve. By the war’s end Grant achieved unrivaled battlefield success and become the architect of Union victory.

At the conclusion of his presentation, Dr. Laver answered questions from the audience. Cox also presented him with a Lewis and Clark Center holiday ornament from the Foundation collection in appreciation for his presentation.

Dr. Harry S. Laver is a professor of military history and the current Maj. Gen. William A. Stofft Chair of Historical Research at the U.S. Army Command and General Staff College, Fort Leavenworth, Kansas. He specializes in the American Civil War and World War II Europe. His recent publications include, A General Who Will Fight: The Leadership of Ulysses S. Grant (University Press of Kentucky, 2013), and as co-editor, The Art of Command: American Military Leadership from George Washington to Colin Powell (University Press of Kentucky, second edition, 2017). From 2013 to 2014, Laver was a Fulbright Scholar at the National University of Ireland at Maynooth. In 2017 he was selected as the Educator of the Year in the Department of Military History at the CGSC. His current book project is Grant and His Generals: A Study in Military Command.

This lecture is part of the Distinguished Speaker Series presented by the CGSC Foundation’s Simons Center for Ethical Leadership and Interagency Cooperation. The first event in the series was presented in May as a Vietnam War Commemoration Lecture with Dr. James H. Willbanks as the lecturer. The next event in the 2022 Distinguished Speaker Series is scheduled for Nov. 9 and will feature a presentation by Dr. Richard S. Faulkner on Gen. John J. Pershing. 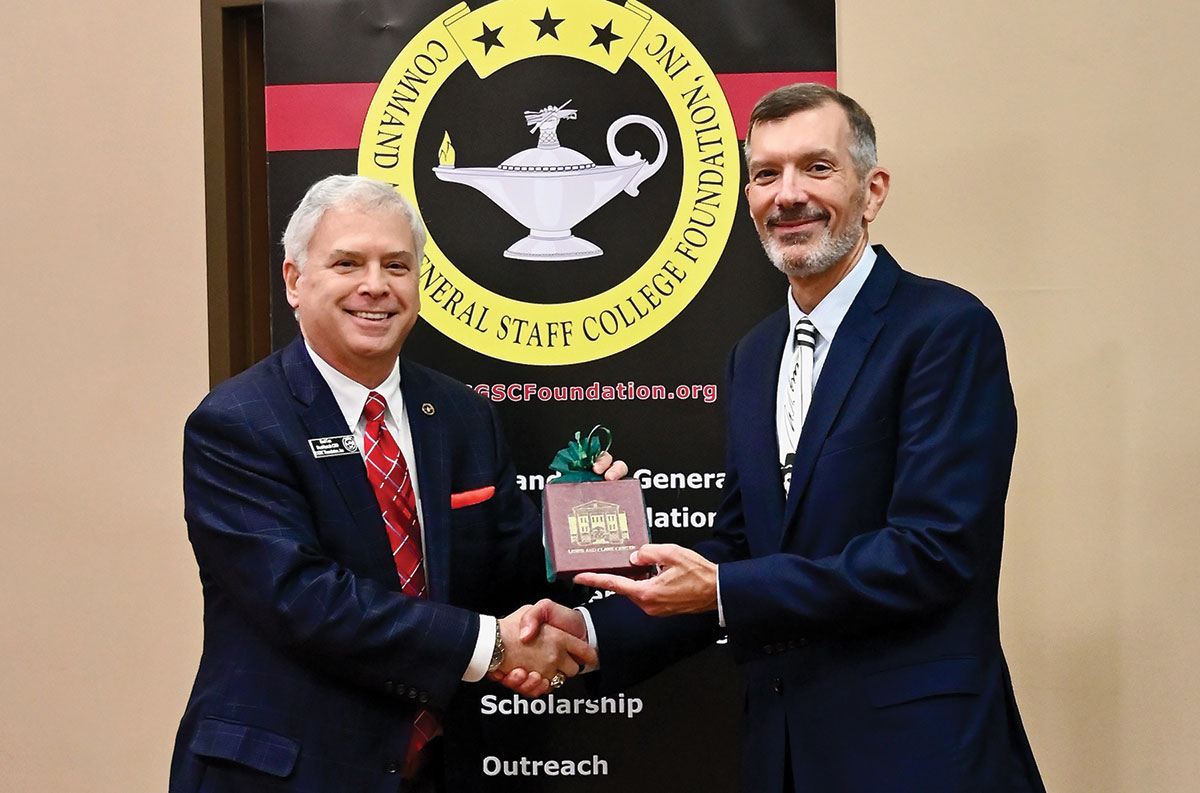 CGSC Foundation President/CEO Rod Cox presents Dr. Harry S. Laver with a Lewis and Clark Center holiday ornament from the Foundation collection in appreciation for his presentation on Gen U.S. Grant during the Distinguished Speaker Series Event at the Riverfront Community Center in Leavenworth, Kansas on Sept. 21, 2022.