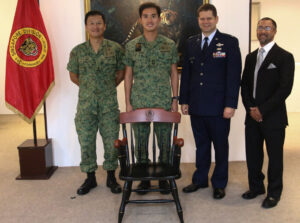 Lt. Col. Wong Shi Ming, CGSOC Class of 2015 (second from left in the photo) recently received the chair representing his receipt of the Birrer-Brookes Award for the best thesis submitted for the Masters of Military Arts and Sciences degree for his class. Wong was officially recognized for this award and several others during the class graduation ceremony on June 12, 2015. He was promoted after graduation.

U.S. Air Force Col. Robert Meeks and Mr. Eugenio Marcelino from the Office of Defense Cooperation, U.S. Embassy Singapore (right of Wong in the photo), made the chair presentation to Wong on Oct. 8. Wong’s commander, Brig. Gen. Ong from the 3rd Singapore Division, was also on hand for the presentation.

“Maj. Wong was a terrific student in all respects,” said Jim Fain, Director of CGSC’s International Military Student Division. “He won four of the major prizes available to our graduates, to include the Eisenhower Award as the top international military student and he had the highest GPA of any student in the class.”

According to Fain, the U.S. country team greatly appreciated the opportunity to engage the Singapore Defence Force in this manner and send their thanks. Fain added that Singapore is blessed with significant resources and the country invests heavily in the education of its military officers. Singapore’s Prime Minister Lee is himself a CGSC graduate as is the current chief of the Singapore Defence Force, Maj. Gen. Perry Lim. Brig. Gen. Ong also has undergraduate and graduate degrees from Stanford University and graduate degrees from King’s College in London and from INSEAD (European Institute of Business Administration).