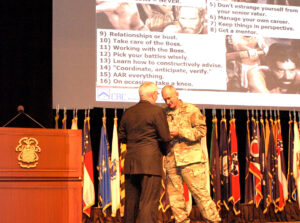 Foundation CEO Doug Tystad presents a coin to Lt. Gen. Brown after his farewell remarks to the CGSC faculty and students April 29.– Click the photo for the full gallery.

Brown received Senate confirmation for his four-star promotion April 28. He relinquished command within hours of the notification in a small ceremony at the Combined Arms Center headquarters officiated by Gen. David G. Perkins, commanding general of the U.S. Army Training and Doctrine Command. Brown departed Fort Leavenworth April 30, to begin his new position as the Commanding General of the United States Army Pacific at Fort Shafter, Hawaii.

Brown served as the commander of CAC and Fort Leavenworth since February 2014.

At the conclusion of his remarks to the class, Foundation CEO Doug Tystad was invited on-stage as part of the farewell. Tystad presented Lt. Gen. Brown with the Foundation’s very own version of the “highly coveted Lamp,” in coin form, in appreciation of Brown’s unwavering support the Foundation.