Gen. Carter F. Ham, U.S. Army, Ret., the former commander of U.S. Africa Command and the current president/CEO of the Association of the U.S. Army (AUSA) (see the full bio), presented the annual Colin L. Powell Lecture for students of the 2020 class of the Command and General Staff Officer’s Course, Aug. 13 at Fort Leavenworth’s Lewis and Clark Center. 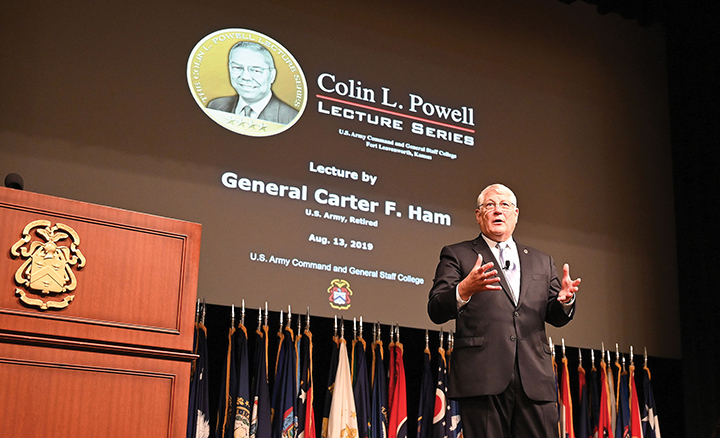 Gen. (Ret.) Carter F. Ham delivers remarks for the Powell Lecture in the Eisenhower Auditorium of the Lewis and Clark Center on Fort Leavenworth Aug. 13, 2019. 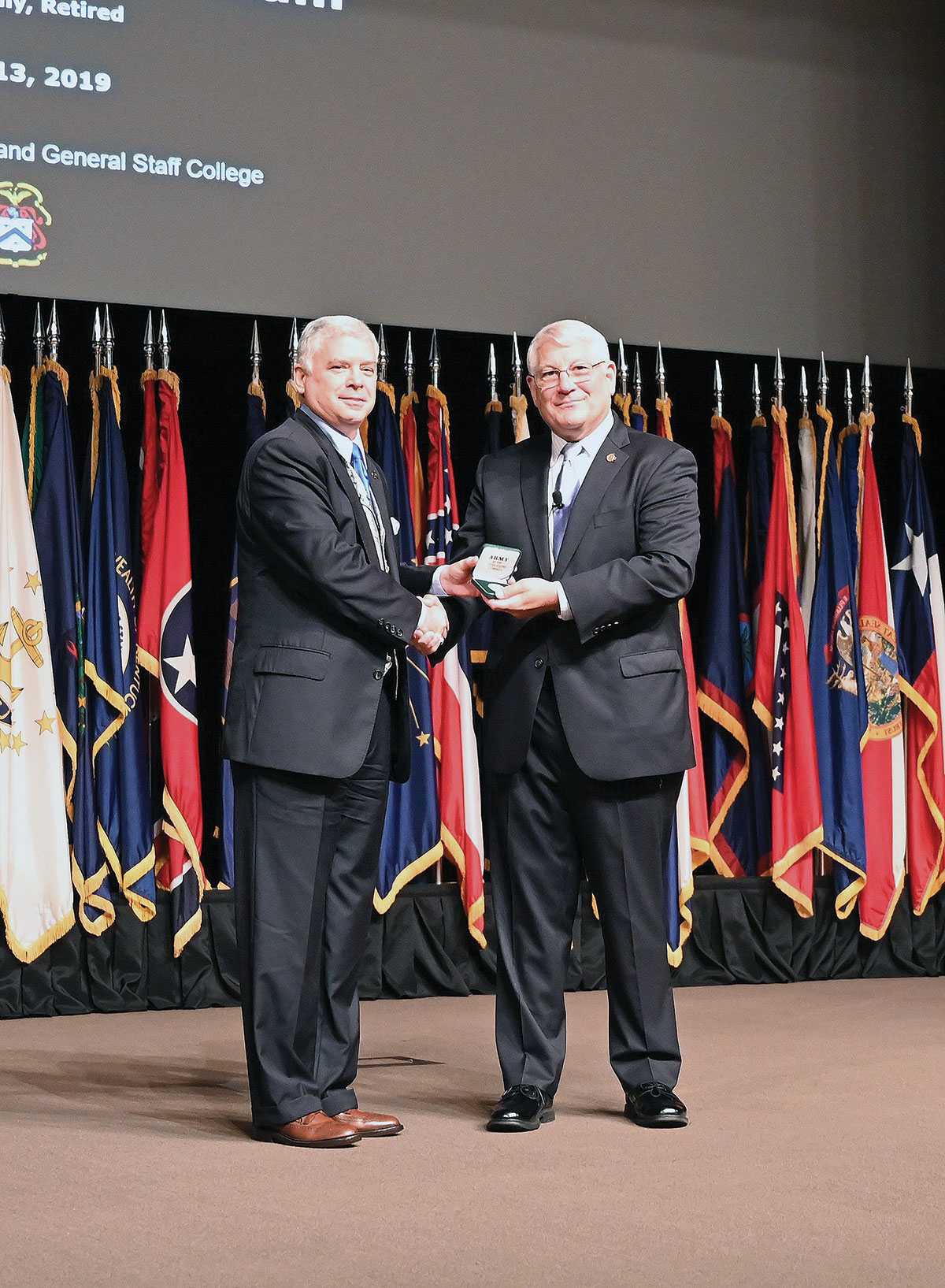 CGSC Foundation President/CEO Rod Cox presents Gen. (Ret.) Carter F. Ham with a silver Colin L. Powell commemorative coin after his presentation of the Powell Lecture for the CGSOC Class of 2020 on Aug. 13, 2019. 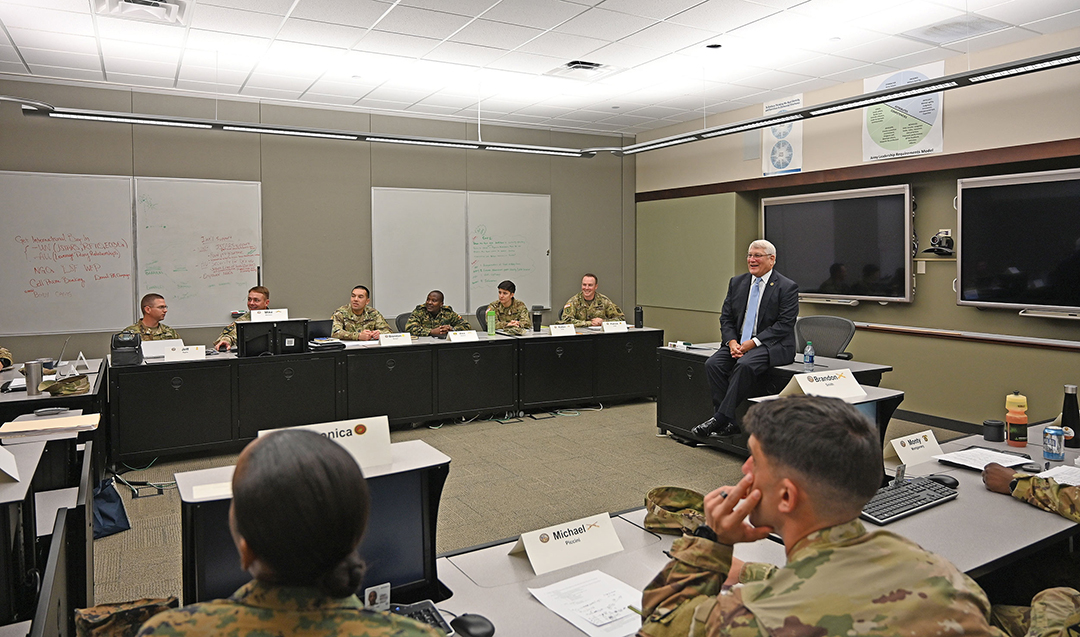 Gen. (Ret.) Carter F. Ham visits with students in their classroom after his presentation of the Powell Lecture for the CGSOC Class of 2020, Aug. 13, 2019. 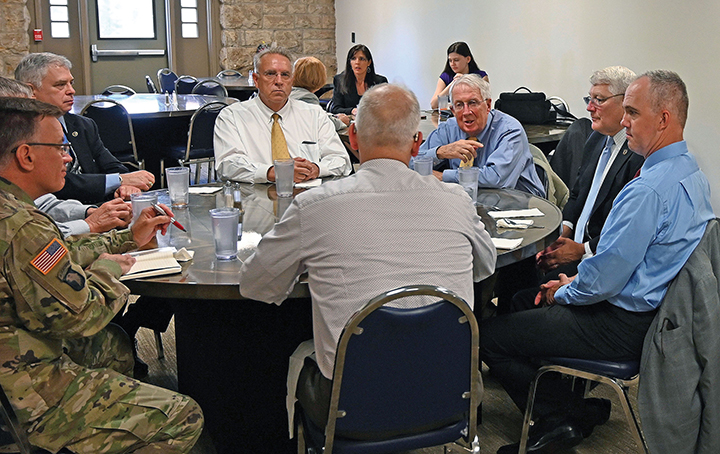 Gen. (Ret.) Carter F. Ham attended a luncheon at the Frontier Conference Center with a group of CGSC Foundation leaders, CGSC and SAMS faculty, as well as two Civilian Aides to the Secretary of the Army (CASAs) from Missouri and Kansas.

The Colin L. Powell Lecture Series was established by the Command and General Staff College and the CGSC Foundation in 2008. Powell, a former Secretary of State and Chairman of the Joint Chiefs of Staff, graduated from CGSC, served at Fort Leavenworth as a brigadier general, and was the driving force behind the development of the Buffalo Soldier Monument that honors the service of the 9th and 10th Cavalry “Buffalo Soldiers.”

Ham opened his remarks by welcoming the new class, which only began a week prior to his presentation. He made a special point to welcome the international officers, especially those from the African continent.

“Africa still holds a very special place in my heart from my last assignment in Africa Command,” he said. “There’s not a lot of Army service that I miss in retirement,” he said jokingly. “Frankly I don’t miss the craziness, I don’t miss the late night phone calls…but I miss being in Africa. I miss the vibrancy, the complexity, the people, the relationships.”

Throughout the morning, Ham spoke about relationships, interweaving the idea of relationships and trust with personal development and leadership within the Army, with family and with community. He spoke of the relationship building that occurs during the staff college experience between Army officers, between Army and other service officers and with the international officers.

Ham said when the College invited him to speak as the Powell lecturer he was asked to focus his lecture on the contemporary international environment and the strategic challenges facing our nation in the international community.

“We find ourselves in, at least potentially, a fundamentally different environment than that which has existed since the end of World War II,” he said. “The rules based, nation state centric international order is, if not in decline, is at least in question.”

Ham said that globalization, the rise of multinational business entities, the growing influence of transnational organizations, for good purposes and for illicit purposes, all seem to chip away at our previously held notions of national interest. Large-scale movement of people migrating to escape natural and man made catastrophes undermine the ability of nations to provide some of the basic functions of the sovereign state. Demographics are changing with yet to be understood implications for our own national security. The world population is getting bigger and younger and explosive growth is occurring largely in the poorest parts of the world. He said the actions of Russia in Ukraine and Georgia and China’s expansion in the South China Sea are examples that the international community would not tolerate just a generation ago. Neer peer competitors are rising again. Climate change manifestations such as rising sea levels are significant and we must either confront or adapt to them or suffer significant consequence. The alliance structure in Europe and NATO is at least in question and our relationship with the Republic of Korea is changing with respect to North Korea. Ham also mentioned the growing “civil-military” divide here in the U.S. with fewer and fewer Americans having any personal connection with the armed forces.

With all of this Ham said, the question for military leaders, CGSC students, is what is the role of the armed forces, the joint forces, and allies and partners around the globe? But more importantly he said, “What is your personal, individual role in this changing environment?”

At the conclusion of his remarks, Foundation President/CEO Col. (Ret.) Rod Cox presented Ham with a silver Colin L. Powell commemorative coin. Afterward, Ham visited two classrooms to converse more with the students and answer questions. During this period he mentioned several examples of how relationships and trust were key when he was negotiating through complex problems with his African counterparts. In a discussion about the civil-military divide in the U.S. he talked about individual Soldiers being present in their communities as volunteers, coaches, leaders of youth groups, parent-teacher organizations and the like, as a means of helping close the gap with an American public that largely has no contact with the armed forces.

Prior to leaving Fort Leavenworth for the day, Ham met with a small group of faculty and CGSC Foundation representatives for lunch at the Frontier Conference Center. Included in the group was Foundation Chairman Mike Hockley, Foundation President/CEO Rod Cox and Lt. Gen. (Ret.) John Miller, Chairman Emeritus of the CGSC Foundation, who was also Ham’s battalion commander when he was a second lieutenant. Also present for the lecture and the lunch was Mr. Keith Pritchard, the Civilian Aide to the Secretary of the Army for Missouri (West); Col. (Ret.) Peter Minalga, a CGSC assistant professor who served as a major on the joint staff with Ham; Col. (Ret.) Jim Greer, former director of SAMS and current SAMS professor; Col. William Galbraith, the new director of CGSC’s Department of Logistics and Resource Operations (DLRO); and others.

The intent of the Colin L. Powell Lecture Series is to invite national and international distinguished personalities to provide lectures on contemporary issues to the faculty, student body, community and business leaders at the Command and General Staff College. Lecturers in the series range from heads of state, heads of government, senior diplomats, and other distinguished persons who could bring their unique perspectives to help educate the audience about historical or contemporary issues of importance to the nation or the international community.

For more photos from the lecture see the album on the CGSC Foundation Flickr site.

View the video of Gen. Ham’s lecture below.