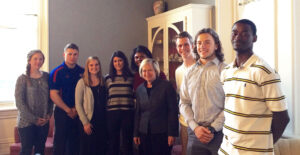 Ambassador Ries attended a dinner hosted and sponsored by Dr. Karenbeth Zacharias, the Director of the Lawrence D. Starr Global Studies Institute and Assistant Professor of History at the University of Saint Mary.  Eight USM students, the USM academic dean, dean of the business school, two professors and a member of the USM board of trustees were in attendance.  After the dinner, the Ambassador mingled with the students and encouraged them to get involved in the world. She also provided the attendees with a short presentation after on the nature of a career as a Foreign Service Officer, after which she fielded a full range of questions from current events in the world at large, to specific questions about her recent experience as Ambassador to Bulgaria.

On both days of her visit, Ambassador Ries spent time with CGSC students in elective courses led by the faculty of CGSC’s Department of Joint, Interagency and Multinational Operations (DJIMO). She spent time in a student seminar for “Statecraft and Diplomacy” with instructor Mr. Matt Routh; “Current Strategic Concepts” with Mr. Bill Pugh; “The Balkans and Russia’s Western Periphery,” with Dr. Bob Bauman; “European Security” with Lt. Col. Chris Springer; and “National Security Policy Formulation” with Mr. Mark Wilcox. She concluded her time at the College with a faculty luncheon.

USM and its Starr Institute are sponsors of the CGSC Foundation’s DACOR Visiting Professor of Diplomacy program. This program brings a recently retired U.S. Foreign Service Officer (normally a retired ambassador) to visit during the elective periods for discussions with students and faculty on issues of international security. The program is run in coordination with the Diplomatic and Consular Officer-Retired (DACOR) organization in Washington, D.C., to bring these subject matter experts to Fort Leavenworth twice a year. The ambassador has discussions about faculty development courses, meets with interested students for special presentations on their area of specialty and joins our sponsors for extra-curricular presentations when possible.

Ries retired from active Foreign Service in summer 2015 from her position as ambassador to Bulgaria. During her career she also served as Director of the Office of UN Political Affairs, Chief of Mission in Kosovo, Ambassador to Albania, Minister Counselor for Political-Military Affairs in Iraq. Additionally, she served as the Principal Deputy Assistant Secretary for European and Eurasian Affairs and Deputy Assistant Secretary for Nuclear and Strategic Policy in Washington, D.C.