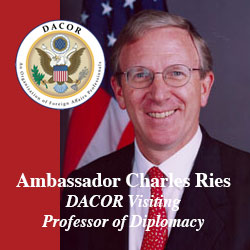 CGSC students were impressed with Ambassador Ries’ presence in their classrooms.

“This was a great opportunity to pick the brain of someone ‘who’s been there’ in the policy-making trenches,” said one officer.

“He really added to my knowledge about the Department of State, building on what had been introduced to me [in our previous classes],” said another.

“This was a rare chance to speak with an ambassador who has made things happen…who has helped make history,” remarked another CGSC officer-student.

Apparently the CGSC students made an impression on the ambassador as well.

“When I spoke to the ambassador, he said he was really impressed with the quality of our students,” said Foundation CEO Doug Tystad. “He remarked they were truly serious and asked great questions and has come away with an entirely new respect for mid-grade military officers and the College.”

Ries currently serves as Vice President, International at the RAND Corporation, where he oversees RAND’s international offices and growing international presence, and a senior fellow whose research has focused on the economics of development. He previously served three decades in the U.S. diplomatic service including an assignment as Coordinator for Economic Transition in Iraq at the U.S. Embassy in Baghdad (2007–2008), where he was responsible for oversight and coordination of assistance and economic policy initiatives. Before that, he was U.S. Ambassador to Greece (2004-2007), and Principal Deputy Assistant Secretary of State for European Affairs (2000–2004). In earlier assignments, Ries was the Minister Counselor for Economic Affairs at the U.S. Embassy in London, and Minister Counselor for Economic Affairs at the U.S. Mission to the European Union. He served as Deputy Assistant U.S. Trade Representative for North American Affairs and was a member of the NAFTA negotiating team.

The CGSC Foundation administers the DACOR Visiting Professor of Diplomacy program in support of the College to bring a recently retired U.S. Foreign Service Officer (normally a retired ambassador) to visit during the elective periods for discussions with CGSC students and faculty on issues of international security. The program is run in coordination with the Diplomatic and Consular Officer-Retired (DACOR) organization in Washington, D.C. The University of Saint Mary and its Starr Institute are sponsors of the program and also host the visiting professor in their classrooms.