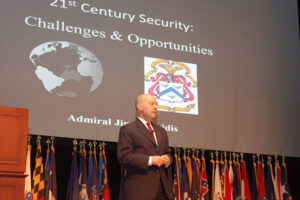 Stavridis has served as NATO’s 16th Supreme Allied Commander Europe and 15th Commander of the U.S. European Command (2009-2013) and commanding general of U.S. Southern Command (2006-2009). He is currently Dean of The Fletcher School of Law and Diplomacy at Tufts University.

Stavridis addressed failures in national security issues starting with the early 20th century with World War I to the current challenges in the Middle East and elsewhere around the world. He also encouraged the current class of CGSC students to write professionally not only to develop themselves, but also to help senior leaders with solutions to current problems.

After his address to the class in the morning, Adm. Stavridis also delivered a shorthand version of his remarks at a luncheon hosted by the CGSC Foundation at the National World War I Museum at Liberty Memorial in downtown Kansas City.

CGSC and the CGSC Foundation established the Powell lecture series in 2008 in honor of the legacy of Gen. Powell at Fort Leavenworth. Former Secretary of State and Chairman of the Joint Chiefs of Staff, General Colin L. Powell graduated from the U.S. Army Command and General Staff College, served at Fort Leavenworth as a brigadier general, and was the driving force behind the development of the Buffalo Soldier Monument that honors the service of the 9th and 10th Cavalry “Buffalo Soldiers.”

Lecturers range from heads of state, heads of government, senior diplomats, and other distinguished persons who could bring their unique perspectives to help educate the audience about historical or contemporary issues of importance to the nation or the international community. The next lecture in the series will be conducted at a date to be determined in 2016.