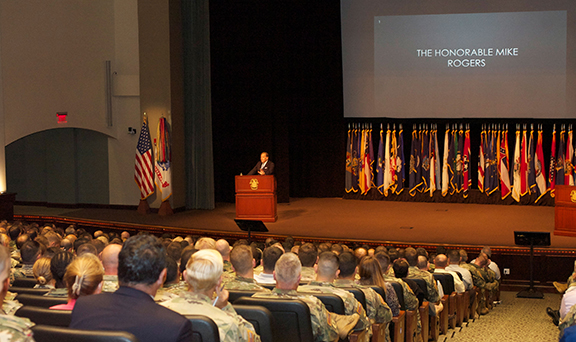 The Colin L. Powell Lecture for the CGSC class of 2018 was conducted at 8:30 a.m., Aug. 23, in the Eisenhower Auditorium of the Lewis and Clark Center. Former Michigan Congressman Mike Rogers presented this year’s lecture.

Rogers served as the U.S. Representative for Michigan’s 8th District from 2001-2015. He was the chairman of the U.S. House Permanent Select Committee on Intelligence from 2011-2015. Recently he served as the national security advisor to the Presidential Transition Team. He is also a former officer in the U.S. Army and a special agent in the FBI. 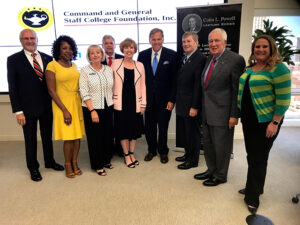 With his background and experience Rogers is uniquely positioned to influence national discussions and offer expert analysis on diverse political and national security-related subjects. During his presentation to the 2018 Class of CGSC, Rogers spoke about national security issues with special emphasis on cyber security and its implications for both national security and defense programs. By all accounts, Rogers captivated the audience with his in-depth knowledge and wry humor…all wrapped around a central message that the nation must deal with sophisticated cyber threats now and into the future.

After his presentation to the class, Rogers attended a luncheon hosted by Foundation President Mike Hockley at Spencer Fane’s office in downtown Kansas City. During the luncheon Foundation Chairman Lt. Gen. (Ret.) John Miller presented Rogers with a commemorative Powell Lecture Series coin from the Foundation in appreciation for his presentation as the Powell lecturer.

For more photos from the lecture visit the CGSC Foundation photo album on Flickr.