The Command and General Staff College inducted the German Army chief of staff into its International Hall of Fame on May 9 at the Lewis and Clark Center. Lt. Gen. Jorg Vollmer began his military career in 1978 and became the German Army Chief of Staff in 2015. He is a 2002 graduate of the Fellowship in Advanced Operational Art at the School of Advanced Military Studies here. 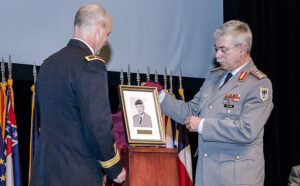 Lt. Gen. Jorg Vollmer, right, and CGSC Deputy Commandant Brig. Gen. John Kem unveil the IHOF portrait of Vollmer during the ceremony May 9. Click the photo for more images from the ceremony.

Brig. Gen. John S. Kem, provost of the Army University and CGSC deputy commandant, hosted the ceremony and noted that since 1980 CGSC has welcomed officers from 154 countries or roughly 79 percent of the members of the United Nations. He said “solving the complex problems of the future will require close cooperation.”

In his acceptance speech, Vollmer recalled the year he was at Fort Leavenworth, 2001-2002, changed the world with the terrorist attacks on New York and Washington. However, he warned the more than 1,300 CGSC and SAMS students in the audience the world has also changed in the time they have been at CGSC with the Russian invasion of the Crimea in 2014, the rise of ISIS/ISIL in 2014, and terrorist attacks in Paris, Copenhagen, Ankara, Paris (again), Brussels, and other locations in 2015 and 2016.

Vollmer said Europe today faces a double threat: Russia from the East and terrorism and the resulting refugee crisis from the South. He said that NATO must stand ready with brigades and divisions to conduct maneuver warfare to deter the threat from the East. He borrowed the words of German military strategist Carl von Clausewitz saying the center of gravity for NATO is cohesion. He noted more than 5,000 German soldiers have rotated in and out of deployments.

He concluded his talk with three final thoughts: 1) Fight the narrative that the West caused Putin’s outrage. NATO and the European Union didn’t take anything, he said. The countries that joined exercised their free will to do so. 2) All parties [in NATO] must provide troops to both threats. He noted the German’s were beneficiaries of a united NATO when they reunited East and West in 1990. 3) Build trust and confidence in each other. He said we must all stand together as a free community of nations. “If an army stops learning and stops adapting, it is losing,” he said.

Prior to his current position, Vollmer commanded the German Field Army. He has commanded Regional Command North in Afghanistan, the German Army Special Operations Division, Mechanized Infantry Brigade 37, 373 Paratroop Battalion, Logistics Support Command for IFOR and SFOR, and two mechanized infantry companies. He has also been the chief of staff of the 1st German/Netherlands Corps, Chief of Army Concepts, and head of the Exercise and Training Center.

The International Hall of Fame provides a prestigious means of recognition for international officer graduates of the U.S. Army Command and General Staff College, who, through military merit, have attained one of the highest positions of importance in their respective countries’ armed forces, or who have held an equivalent position by rank or responsibility in a multinational military organization. Vollmer joins 262 international officers from 71 countries who have already been enshrined in the Hall. Fifteen members of the hall have served or currently serve as heads of state in their countries.

Two other international officers were inducted in April. – Click here for the story/photos. Vollmer could not attend that ceremony because of a scheduling conflict.

« Read Previous Post: GAO: DoD should clarify its role during cyber incidents
Read Next Post: They were Soldiers… »