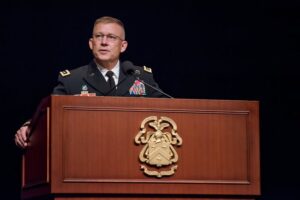 “Flags, although they’re cloth and just a symbol, they truly do represent the fabric of each of our nations. They recognize our culture, they recognize our beliefs, they recognize those things we stand for and our history,” said Lt. Gen. Michael Lundy, Commanding General of the Combined Arms Center and Fort Leavenworth and Commandant of CGSC. 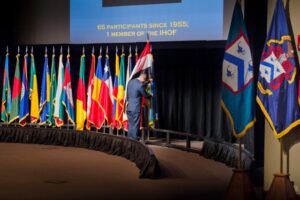 Lundy told members of the class audience, “The Command and General Staff College is the place where we think about how we operate as a part of this greater world in a multi-national perspective. You’ll 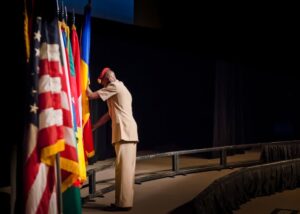 have an opportunity to learn from each other, and you’ll learn many things about how the United States Army and the Joint Force fight but it’s also important for us to understand how we fight with our multi-national partners.” He continued, “Over the next year, every day is an opportunity to learn not only from each other, and the instructors but from all of our international partners.”

The 119 international student delegation is the largest to attend the class for mid-career officers since the college moved to its current location in 2007. International military education began at Fort Leavenworth in 1894. Since then, more than 8,000 international officers from 164 countries have attended classes alongside their United States counterparts.

The international students in the class join more than 1,000 United States Army, Marine Corps, Navy, Air Force and Coast Guard officers for the 10-month class that graduates in June 2018. In addition, 12 civilians from other U.S. Government agencies and departments and 12 Army civilians will attend the class. The course is designed to develop war-fighting and adaptive leadership skills necessary for military officers to be proficient in Unified Land Operations.

CGSC strives to be an educational center of excellence that is renowned in the study of leadership, the conduct of joint and combined land warfare, and the application of Joint, Interagency, Intergovernmental, and Multinational organizations to synchronize all elements of power to achieve national objectives. The College supports field commanders with well-trained and well-educated leaders, in-depth research in operational-level studies, and reach-back planning in support of ongoing operations.
———————————————————————————————————————–
For more information contact the Army University Public Affairs Office at (913) 684-5428 or ArmyU@mail.mil.