Singapore’s Prime Minister Lee Hsien Loong and his wife were honored at the White House Aug. 2, in a state dinner hosted by President Barack Obama. According to reports Singapore was the first Southeast Asian country to have a political leader honored with a U.S. state dinner, and only the fifth Asian nation after India, China, Japan and South Korea. His visit also marked the 50th anniversary of diplomatic relations between Singapore and the U.S. 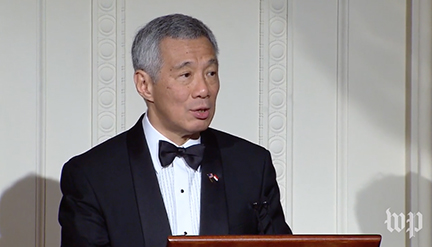 Prime Minister Loong is a graduate of the CGSC Class of 1978. During his remarks at the dinner, he made special mention of his time at CGSC and his U.S. sponsors that he had while living and studying at Fort Leavenworth.

“Our armed forces personnel have taken part together in international operations in Afghanistan and in the Middle East,” Loong said. “They also train alongside each other on professional courses and joint exercises.”

“I myself, as a soldier attending U.S. courses, have personally experienced the dedication, the competence and the warmth of our hosts,” Loong continued. “I made good friends and we still keep in touch after many decades, and they include Frank McGurk and Mary McGurk, who are my military sponsors at the Command and General Staff College at Fort Leavenworth in Kansas nearly 40 years ago, and they are here tonight.”

“This remark is a great reminder of the power of CGSC and the sponsorship programs for our international officers,” said CGSC Foundation CEO Doug Tystad.

Visit the White House blog for more about the Prime Minister’s visit.