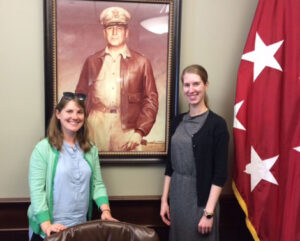 Foundation CEO Doug Tystad led Foat and Hersh on a tour of the Fort Leavenworth post to familiarize them with its history, which dates back to the early 1800’s. They also took a closer look at some of the oldest buildings on the post, which are also some of the oldest buildings in Kansas. After the tour of the post, they arrived at the Lewis and Clark Center, home of CGSC.

PBS will be launching a ten-part series produced by Ken Burns on the Vietnam War in late 2017. Because of this, much of the KCPT visitors’ focus during their tour was on the Vietnam War and the role that the Command and General Staff College played in it.

As Foat and Hersh viewed the shadow boxes of the members of the Fort Leavenworth Hall of Fame in the atrium of the Lewis and Clark Center, they noted the presence of the first Medal of Honor recipient from the Vietnam War, Roger Donlon, a former CGSC faculty member and former trustee of the CGSC Foundation. They also recognized the shadow box dedicated to General William Westmoreland, commander of U.S. forces in Vietnam from 1964-1968. As they walked around the Lewis and Clark Center, they were very interested in the artwork depicting scenes from the Vietnam War and the stained glass windows displaying that conflict. They were also very surprised to learn about the international officers from Vietnam who now attend CGSC each year.

After their tour, Foat and Hersh visited the Ike Skelton Combined Arms Research Library on post to do further research on the local veterans from the Vietnam War. In the future, Foat will also be interviewing CGSC’s former director of military history and now its General of the Army George C. Marshall Chair of Military History, Dr. Jim Willbanks, who is considered one of the nation’s foremost experts on the Vietnam War. Willbanks is also a consultant for the Ken Burns-produced series to be released on PBS in 2017.