Dr. John Curatola, a professor of history at the U.S. Army Command and General Staff College at Fort Leavenworth, presented “The Great War in the Air” in the Arnold Conference Room of the Lewis and Clark Center on Fort Leavenworth, May 11, at 6 p.m. His lecture was the seventh in a series of lectures entitled the “General of the Armies John J. Pershing Great War Centennial Series” to commemorate the 100 year anniversary of WWI. 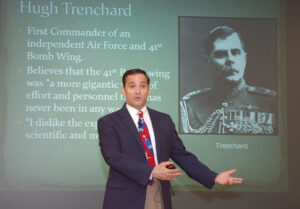 Dr. John Curatola delivers his presentation on “The Great War in the Air” on May 11. Click the photo to view the full photo gallery.

Dr. Curatola provided a very animated and interesting presentation that addressed the development of airpower from before the First World War and its subsequent maturation during the conflict. He walked attendees through the path that airmen and their aircraft travelled during the war and how their assigned missions, their aircraft and the doctrine for their employment changed significantly as airpower became a more and more an important element on the battlefield.

“I thoroughly enjoyed Dr. Curatola’s presentation,” said one retired officer who was in the audience. “He held my interest with his humor and how he kept the human element at the forefront of what could have been a very technical presentation.”

Dr. Curatola is an associate history professor at the U.S. Army Command and General Staff College at Fort Leavenworth, Kansas. Prior to this position he was an active duty Marine Corps officer and retired in 2009 as a lieutenant colonel after 22 years of service. Graduating from the University of Nebraska with a bachelor’s in political science, he also holds a master’s degree from George Mason University in Virginia in U.S. history, and a Master of Military Arts and Science from the U.S. Army Command and General Staff College. He received his doctorate in U.S history from the University of Kansas. He has been a featured speaker at numerous forums and published in many periodicals and books. His most recently published book is Bigger Bombs for a Brighter Tomorrow: The Strategic Air Command and American War Plans at the Dawn of the Atomic Age 1945-1950.

The CGSC Department of Military History hosts the General of the Armies John J. Pershing Great War Centennial Series with support from the CGSC Foundation. The lecture series intended to foster understanding of this world-changing conflict during its 100-year commemoration. More than any other single event, World War I was the decisive, shaping experience of the Twentieth Century. It was a brutal war that brought down four empires, led to revolution in Russia, and eventually brought the United States onto the world stage as a major power. We live with its results to this day. All lectures in the series are free and open to the public.

The next series in the lecture entitled “The Battle of the Somme” is scheduled for September 2016 (specific date TBD). For more information on this or other lectures in the series contact Dr. Jim Willbanks, Director of the CGSC Department of Military History: email– james.h.willbanks.civ@mail.mil or phone– 913-684-2056.