The 2018 Fort Leavenworth Ethics Symposium was conducted April 30-May 1, 2018. This year’s theme was “The Impact of Diverse Worldviews on Military Conflict.” 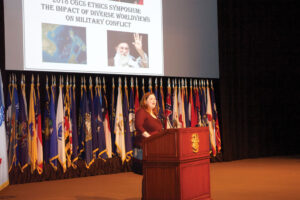 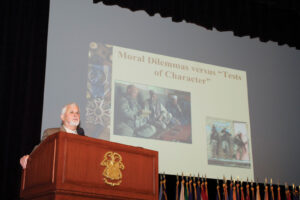 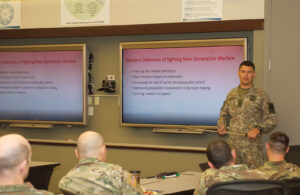 Maj. Egidijus Cuitas, an international military student in the current CGSOC class, presents his award-winning paper during a breakout session at the 2018 Fort Leavenworth Ethics Symposium. His paper entitled “Criminal Ethos of Russia – The Great Western Dilemma of Fighting New Generation Warfare” was one of two selected as the top papers for the symposium. 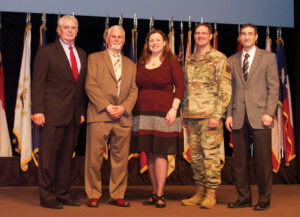 More than 1,000 members of the Command and General Staff Officers Course (CGSOC) along with guests and visitors participated in the ethics conference that featured a variety of guest speakers, three panel presentations and over thirty breakout topics. More than 50 papers were submitted for discussion at the symposium, of which 34 were selected to be presented during breakout sessions. At the end of the symposium awards were presented to the two top papers among those 34: “Criminal Ethos of Russia – The Great Western Dilemma of Fighting New Generation Warfare” by Maj. Egidijus Cuitas, an international military student in the current CGSOC class, and “What were you thinking? How to discover your moral philosophy: A Forensic Approach,” by Dr. Richard McConnell, a CGSC professor, and Maj. Evan Westgate, a U.S. Army officer-student in the current class.

Dr. Lucas focused his opening remarks around the “ethics training” that everyone is exposed to. “For most of us, particularly in the military, and also in business organizations, ethics is about compliance, usually with a bewildering array of regulations that are complex and burdensome,” he said. “Often this training is inflicted upon everybody after a scandal of some sort.”

Lucas said this tedious approach to ethics training caused most to dread the topic. He jokingly offered his own definition of ethics: “Ethics is a form of punishment that we have designed to inflict upon those who have themselves done nothing wrong.”

On a serious note he added that ethics training is really not that at all. The difference he said lies in understanding the differences between “moral dilemmas” and “tests of character.” He said “a ‘moral dilemma’ is a situation in which a person or persons of good character and best intentions nonetheless face situations or choices in which they may be uncertain, disagree with each other and wonder what is the right thing to do in that specific situation.”

Lucas explained that in the military environment this “moral dilemma” may involve uncertainly or disagreement on applying specific rules of engagement or the broad moral conceptions of just and unjust warfare. “These are profound and perplexing problems about which reasonable and well-intentioned people can disagree,” he said. By contrast, he added that, “tests of character” are simply those scandals or situations that typically find their way into our “ethics training.” The tests of character are simple questions of right and wrong. That’s the kind of situation that causes the sort of ethics training we typically face.

“Ethics is not tests of character, but genuine moral dilemmas that you face in the pursuit of your professional responsibilities in uniform,” he said.

Lucas went on to discuss how we determine “who is on the side of justice” in warfare. “How do we know we’re on the right side?” he said. “How do we know we’re right and ‘they’ are wrong?” – Lucas said these types of moral dilemmas are what the ethics symposium is all about…again, ethics is not about discussing the usual failures described in “tests of character.”

In the symposium’s closing keynote, standing in front of a graphic depicting North Korea, Russia, Iran, and the South China Sea Dr. Shannon E. French, CGSC’s General Hugh Shelton Distinguished Visiting Chair of Ethics, asked the audience “What kind of person do you want to be and why?” The natural follow-up, she said, is how do you become that person and retain that identity? After reminding her audience “Everyone is capable of doing anything,” she shared with them some ways to prepare for coming ethical crises. First, she said, figure out who you can trust – friends and mentors. Secondly, learn what can interfere with making the ethical choice – avoid false dilemmas. Thirdly, develop the ability to shift between different kinds of tasks. And last, learn the stories of people who have made the right decision.

As an example of the last, she told several stories of Saladin, leader of the Muslim tribes during the crusades, making ethical decisions. This included allowing the survivors of Jerusalem to depart rather than slaughtering the inhabitants as had been done when Christian forces took the city from the Muslims years earlier.

The three panel presentations during the symposium included “Salafi-Jihadism: A look at the individual and organizational level ethical framework,” “Cultural Perspectives, Geopolitics and Energy Security of the Koreas,” and “Understanding the Chinese Perspective – What History Tells Us About the Future.”

The Culture, Regional Expertise and Language Management Office (CRELMO) put together what most considered an outstanding panel on North Korea. Three internationally known Korea experts and one subject matter expert from CGSC talked about one of the hottest topics of the day.

The Salafi-Jihadism panel was similarly well done according to those that attended. This panel explored the ethical reasoning of Salafi-Jihadists to better understand their motivations and moral decision making. Moderated by Chaplain (Maj.) Josh Gilliam, a CGSC instructor of World Religions, the panel members were: Graeme Wood, national correspondent for the Atlantic and lecturer in political science at Yale University, who presented “The Ethic of ISIS; ” Lt. Col. (Ret.) Brian Steed, a former U.S. Army Middle East Foreign Area Officer and CGSC instructor, who presented “How Salafi-Jihadists View the West;” and Bander Almohammadi, a student of the University of Kansas, School of Law, who pressented “Islamic Law and Salafi-Jihadism.”

The panel on China was moderated by Dr. John Modinger, an instructor in CGSC’s Department of Joint, Interagency, and Multinational Operations (DJIMO). Panel members included Dr. David Graff, the Picket Professor of Military History at Kansas State University, who addressed the topic, “The lesson the People’s Republic of China draws from the past is that the greatest – security and prosperity – can be achieved only by means of a hierarchical and authoritarian internal order and a hierarchical international order dominated by an assertive China.” Also presenting in this panel was Dr. Felix Moos, professor of anthropology and ethnology at the University of Kansas, who presented “Culture change and development, comparative value systems, ethnic conflict, East and Southeast Asia, Pacific.”  Lt. Cmdr. (Ret.) Cindy Hurst, a research analyst in the Foreign Military Studies Office, who presented “The Five Categories of Chinese Strategy with an Emphasis on the 36 Strategies (Stratagems) of Ancient China and the Globally Expanding People’s Liberation Army.” The fourth member of the panel was Dr. Joseph Babb, an instructor in CGSC’s Department of Military History, who presented the topic, “The Importance of Studying Sunzi’s Art of War to Understand Chinese Warfare Today.”

For more photos from the symposium visit the albums on the CGSC Foundation Flickr site and the CGSC Public Affairs Flickr site.

The videos are posted on the CGSC Foundation’s YouTube site.