Pershing lecture takes a look at the German home front 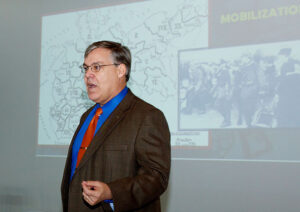 The evening began with a small reception for attendees sponsored by First Command Financial Services in Leavenworth. Col. (Ret.) Roderick Cox, the Simons Center program director with the CGSC Foundation, welcomed attendees, followed by the director of the CGSC Department of Military History, Dr. Tom Hanson, who introduced Dr. Stephenson. Stephenson’s lecture traced the evolution of the German Empire from material wealth, unity, and national resolve to starvation, despair, and revolution. He also discussed the bitter legacy of the home front experience for the Weimar Republic and, ultimately, Hitler’s Third Reich.

Stephenson served 25 years as an Army officer, retiring in 2001. He has a bachelor’s degree from the United States Military Academy, a master’s in history from Syracuse University, and a doctorate in history from the University of Kansas. His book, The Final Battle: Soldiers of the Western Front and the German Revolution of 1918, won the 2010 Tomlinson Prize for Best Book in English on World War I.

Dr. Stephenson will deliver this lecture again on Oct. 11, at 6:30 p.m. at the National World War I Museum in Kansas City.

This was the 12th in a series of lectures intended to educate the public about World War I during its 100-year commemoration. The CGSC Department of Military History hosts the General of the Armies John J. Pershing Great War Centennial Series with support from the CGSC Foundation. The lecture series intended to foster understanding of this world-changing conflict. All lectures in the series are free and open to the public.

The next lecture in the Pershing series is scheduled for Nov. 14 at 6 p.m. at the Stove Factory Ballroom (417 S. 2nd St.) in Leavenworth Kansas. Dr.’s Sean Kalic and Gates Brown will present a lecture entitled “The Russian Revolutions.”

Visit the CGSC Foundation Flickr site for more photos from the lecture.