Pershing Lecture Series continues with look at the Battle of Verdun

As part of an on-going series of lectures intended to educate the public about World War I during its 100-year commemoration, Dr. Richard Faulkner, a professor of history at the U.S. Army Command and General Staff College at Fort Leavenworth, presented “Verdun: The Bleeding of Nations” in the Arnold Conference Room of the Lewis and Clark Center on Fort Leavenworth, March 9, at 6 p.m. More than 60 attended the lecture. 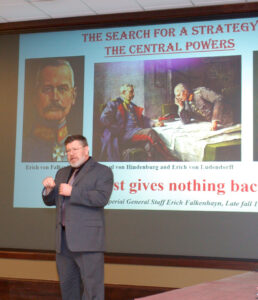 Dr. Richard Faulkner delivers his lecture on the Battle of Verdun.–Click the photo to see the full photo gallery.

Dr. Faulkner led a discussion on the Battle of Verdun, the longest and one of the bloodiest battles of the Great War. When the battle ground to a halt after nearly ten months of fighting, the total casualties for the French and Germans exceeded 700,000 men. In launching the battle, the German Chief of Staff, Erich von Falkenhayn, fully acknowledged the ugly attritional realities of the World War I battlefield and hoped to turn these actualities to his purpose. By planning a battle that would force the French to bleed away their manpower, Falkenhayn hoped to change the direction and outcome of the war. Faulkner’s lecture will examine the genesis and course of the campaign and will also examine how bad assumptions, underestimating the enemy and the difficulty in operationalizing strategic concepts led to one of the most brutal and tragic battles in modern history.

Dr. Richard S. Faulkner is a Supervisory Professor of Military History at the U.S. Army Command and General Staff College at Fort Leavenworth, Kansas. He holds a Ph.D. in American History from Kansas State University and a master’s in American History from the University of Georgia. Faulkner served in the U.S. Army for 23 years as an armor officer and retired as a lieutenant colonel in 2006. His assignments in the Army included commanding a tank company in combat during operation Desert Storm and teaching American History at the United States Military Academy at West Point. His book, The School of Hard Knocks: Combat Leadership in the American Expeditionary Forces, was awarded the Society for Military History’s Distinguished Book Prize for the best work in American military history in 2013.

The CGSC Foundation is providing support to this lecture series through a grant from Lockheed Martin’s “Army and Special Operations Forces Programs,” part of its Washington, D.C.–based division. Retired Army Colonel Harry Lesser, Jr., heads up the program and as a CGSC alumni, has been a champion of CGSC Foundation programs within Lockheed Martin for several years.

The CGSC Department of Military History hosts the General of the Armies John J. Pershing Great War Centennial Series with support from the CGSC Foundation. The lecture series intended to foster understanding of this world-changing conflict during its 100-year commemoration. More than any other single event, World War I was the decisive, shaping experience of the Twentieth Century. It was a brutal war that brought down four empires, led to revolution in Russia, and eventually brought the United States onto the world stage as a major power. We live with its results to this day. All lectures in the series are free and open to the public.

For more information on this or other lectures in the series contact Dr. Jim Willbanks, Director of the CGSC Department of Military History: email– james.h.willbanks.civ@mail.mil or phone– 913-684-2056.

The next lecture in the series is set for May 11, 2016.
Dr. John Curatola will lead a discussion on “The Great War in the Air.”

This lecture series made possible by a grant from Lockheed Martin Corporation.