Dr. Wendall C. King, the CGSC Dean of Academics; Dr. Ralph O. Doughty, CGSC Chair of Interagency and Multinational Studies; and Col. (Ret.) Lynn W. Rolf Jr., CGSC Director of Educational Technology; all retired from their duties in August 2016, marking the passing of 99 years of military service and 40 years of service to the U.S. Army Command and General Staff College. 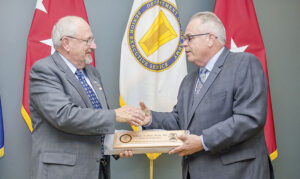 Mr. Kirby Brown, right, deputy to the commanding general of Fort Leavenworth, congratulates Dr. Wendall C. King, CGSC dean of academics, and presents him with a plaque during King’s retirement ceremony Aug. 5. – Click the image for more photos from the ceremony.

Dr. Wendall C. King served as the dean of academics since August 2006. Prior to assuming duties as the dean, King served 34 years as a medical service corps officer in the Army. He was initially commissioned into the ordnance corps in 1972, after completing his bachelor’s degree in chemical engineering at Tennessee Technological University. He subsequently received his master’s in civil engineering through Tennessee Tech and entered active duty in the medical service corps. He later obtained his doctorate in civil engineering through the University of Tennessee and a master’s in National Security and Strategic Studies through the Naval War College. In 1991, he led the Southwest Asia Health Risk Assessment Team, which determined health risk to U.S. troops exposed to the smoke from the Kuwait oil fires and to support the restoration of Kuwait. Later in 1991, he was assigned as program director and professor in the U.S. Military Academy’s environmental engineering program and in 1998, became head of the department of geography and environmental engineering. In 1994, Dr. King was assigned to the Army Chief of Staff’s crisis action team for the Rwanda relief mission as the medical operations planner. In 2005, Dr. King deployed to Afghanistan to the Office of Military Cooperation to assist in the development of the new Afghanistan Military Academy. He retired from active duty in the rank of brigadier general in August 2006 and assumed his duties at CGSC that same month.

Dr. King has authored two books and 13 book chapters including his most recent manuscript “Understanding International Environmental Security: A Strategic Military Perspective.” He has published more than 30 journal articles, dozens of scientific reports, and lectured at more than 40 professional conferences including the technical sessions of the Copenhagen climate summit in 2009. 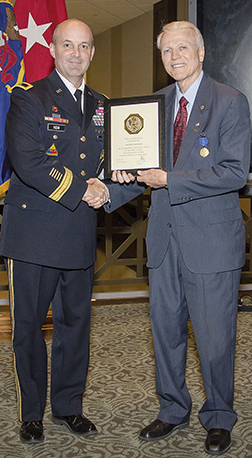 Dr. Ralph Doughty began his service at CGSC 11 years ago, first serving as Professor and Transformation Chair, a position sponsored by the Office of the Secretary of Defense. He later assumed duties as Professor and Chair of Interagency and Multinational Studies, responsible for developing relationships with government departments and agencies, as well as with non-governmental agencies to enable these organizations to participate in educational programs at CGSC.

General Doughty commanded at battalion, brigade and division level during his 34-year military career. He also commanded the task force that planned and executed the Army ceremonies at Utah Beach, France in June 1994 to commemorate the 50th Anniversary of the D-Day Normandy invasion in World War II. He also served on the Army Reserve Forces Policy Committee at the Pentagon for the Department of the Army for two years. He retired from active service as a major general in 1996.

Doughty obtained his doctorate in Mechanical Engineering from the University of Alabama. He was president of a civilian consulting company in the U.S. for 10 years prior to returning to Fort Leavenworth. He is also a graduate of the U.S. Army War College, the Army Division Commander Course, and the Leadership Development Course at the Center for Creative Leadership. He has served as a Mechanical Engineering representative for the Accreditation Board for Engineering and Technology for U.S. universities, evaluating programs at Stanford, Lehigh, Louisiana State, and North Carolina State universities. He was selected as a Distinguished Engineering Fellow of the University of Alabama College of Engineering, and is the principal author of over 20 technical publications and five U.S. patents.

Col. (Ret.) Lynn W. Rolf Jr., has served as CGSC’s Director of Information Technology since August 1997, continuing after his retirement from active duty in July 2001. He began his uniformed service in 1970 as a West Point graduate with a commission in the armor branch. His first assignment was as a platoon leader in 2nd Battalion, 8th Infantry at Fort Carson, Colo. He was deployed to DaNang, Vietnam in 1971 as a platoon leader and recon platoon leader in 1st Battalion, 46th Infantry. 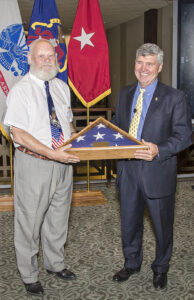 Rolf continued his distinguished career as an armor officer, commanding two companies in Germany; serving as an assistant professor in the math department of the U.S. Military Academy; completing CGSC at Fort Leavenworth in 1984; and serving as the regimental adjutant and as a squadron executive officer in the 2nd Armored Cavalry Regiment in Germany from 1984-1987. In 1987, he was assigned to Fort Riley where he served in the division operations staff, then from 1988-1990, he commanded 1st Battalion, 34th Armor. After battalion command, Rolf was assigned as a staff group leader for the Combined Arms Services and Staff School (CAS3) at Fort Leavenworth. In 1992, he attended the U.S. Army War College at Carlisle Barracks, Pa. He remained there after graduation, becoming the director of General Officer Distance Education Programs and Educational Technology until 1997. He was reassigned to Fort Leavenworth in August 1997, assuming his duties as CGSC’s director of information technology, a position he continued to occupy after retiring from active service.

Foundation CEO Doug Tystad noted that Lynn Rolf, Jr., more than any other person alive, is responsible for the excellence in education support from the Lewis and Clark Center design.

These three gentlemen represent a wealth and depth of experience that will be hard to replace at the Command and General Staff College. Each was an expert in his field and a great friend to the students, staff and faculty of the College. The CGSC Foundation salutes Dr. King, Dr. Doughty and Col. (Ret.) Rolf as they leave Fort Leavenworth and begin the next chapter of their lives.