During the evening of March 8, the guests were welcomed by the CGSC Chief of Staff Mr. Jeff LaMoe, who provided an overview of the College, 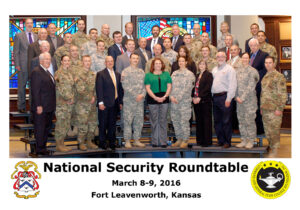 Click the photo to view the NSRT photo gallery.

including how the Army develops leaders. On March 9, the group met at Flint Hall to receive a briefing from SAMS Director Col. Hank Arnold and SAMS exercise director Eric Price on the planning exercises the students were conducting that morning. The participants then went out with their SAMS student escorts to spend time in the SAMS classrooms.

Initial feedback from participants was positive, but according to Tystad, the Foundation will be sending them a survey to get any specific comments they have in the coming weeks. As newly-minted NSRT graduates the participants will also be charged with nominations for attendees at the next NSRT program scheduled for later in 2016.

At the conclusion of the program CGSC Chairman Lt. Gen. (Ret.) Miller and SAMS Director Col. Arnold presented each guest with a graduation certificate and a challenge coin. The students and faculty that supported the program also received coins.

Leaders in this roundtable program: