“The mind is the key to victory,” Lt. Gen. Gary H. Cheek told U.S. military and international officers, and civilians from U.S. federal agencies graduating from the U.S. Army School of Advanced Military Studies on May 26 at 9 a.m. in the Eisenhower Auditorium of the Lewis and Clark Center. The 135 graduates include 14 international officers from nine countries and seven federal civilian employees representing five federal agencies. Nine students graduated early to join units in critical need of their skills. 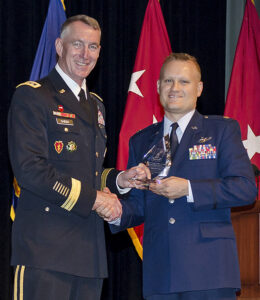 Cheek who is currently the Director of the Army Staff is a 1993 graduate of SAMS. He told the graduates he wanted them to remember three things from his remarks. The first was “do windows.” He told the class that although they have completed one of the Army’s premier courses they will be asked to do a variety of things when they get to their new units. They should do all things to the best of their ability, he said.

His second point was “be a good teammate.” Cheek said that doesn’t mean just to the people in the students’ work units but also in higher and lower headquarters and in adjacent units that they impact. “Leverage relationships to make things better for all,” he said. Point number three, he said, was “Doctrine, Doctrine, Doctrine.” He told the graduates they must know doctrine, speak its language, and know its processes and its terms.

Cheek is a 1980 graduate of West Point. He served two operational deployments in Kuwait and one in Afghanistan. His most recent deployment was as Deputy Commanding General of U.S. Army Central and 3rd Army in Kuwait in 2012. Commissioned as an artillery officer, he commanded at the battery, battalion, and division artillery levels. As a general officer, Cheek has served as the Assistant Surgeon General for Warrior Care and Transition and the Commanding General of the Warrior Transition Command, the Director of Military Personnel Management, and Assistant Deputy Chief of Staff, G-3/5/7 in addition to his current position and the 3rd Army position.

Air Force Major James Day received the Col. Thomas Felts Leadership Award considered the top award for SAMS graduates. The award is named in honor of a SAMS graduate who was killed in action in Iraq in 2006. Sponsored by the Command and General Staff College Foundation, the award is presented to the student who best exemplifies all the desired attributes of an Advanced Military Studies Program graduate. Other award recipients were Army Major Steven J. Ackerson who received the Iron Planner award for best physical fitness test score, Patti Bielling of U.S. Army North who received the Simons Center Interagency Writing Award, Army Major Woo C. Shin who wrote the best monograph for the Advanced Military Studies Program class, and Patrick Wesner of the United States Agency for International Development who had the best monograph for the Advanced Strategic Leader Studies Program.

Most of the graduates completed the Advanced Military Studies Program. This 10-month long course is a graduate level education program to develop innovative and adaptive leaders who excel at operational art and are willing to experiment and accept risk. Program graduates apply critical and creative thinking to solve complex problems, demonstrate mastery of joint and Army doctrine, and anticipate the future operational environment. They synthesize the elements of U.S. national power in joint, interagency, intergovernmental and multinational operations, and demonstrate effective communications.

All graduates receive the Master of Military Art and Science Degree. The MMAS is awarded by the Command and General Staff College based on students successfully completing the School of Advanced Military Studies curriculum, passing an oral comprehensive exam, and successfully completing an extensive monograph based on original research. Completed monographs are published electronically by the Combined Arms Research Library. CGSC is accredited by the Higher Learning Commission to award the master’s degree.

See the CGSC Public Affairs photo gallery for more photos of the ceremony.