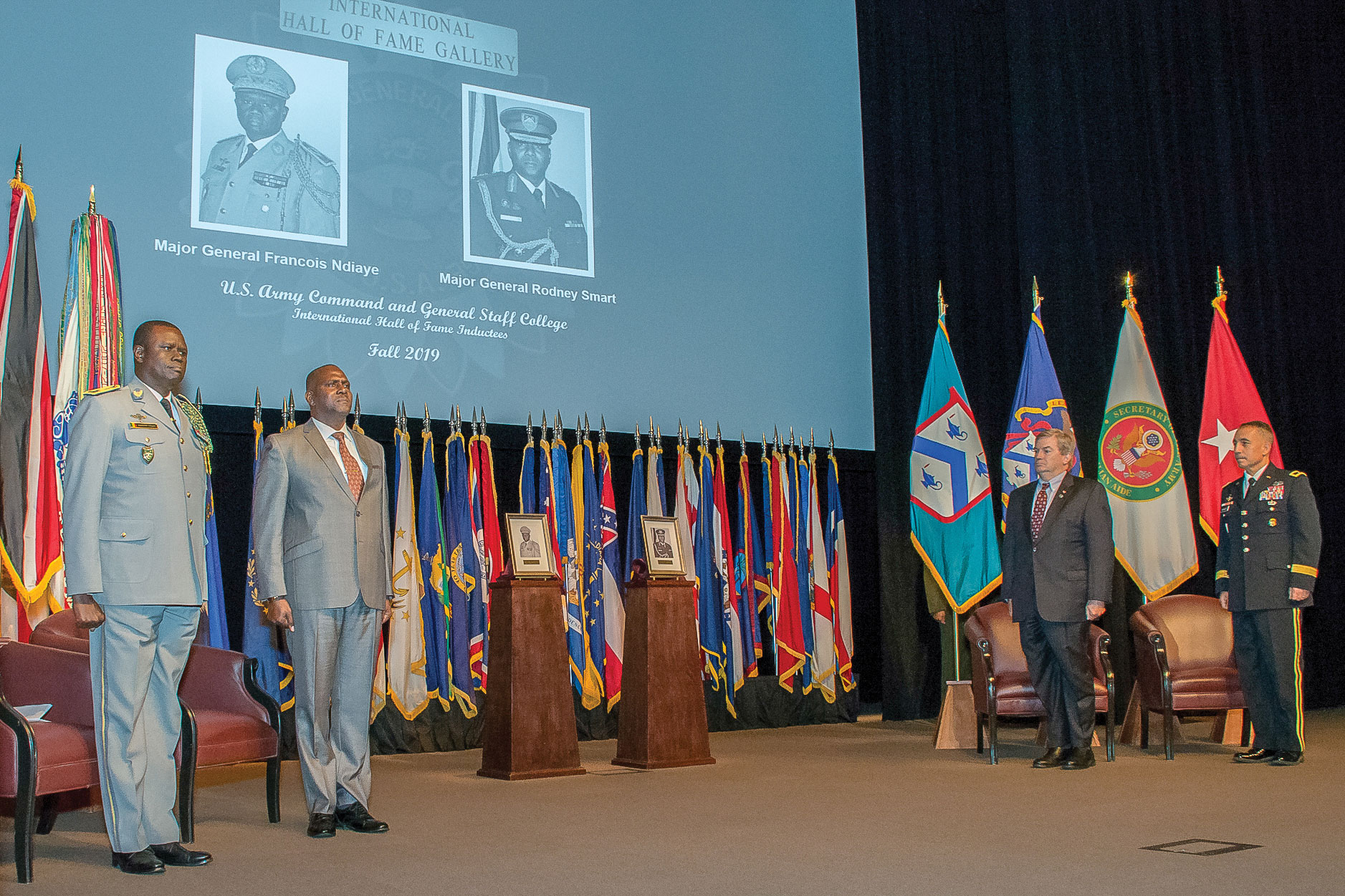 (Katie Peterson, Fort Leavenworth Lamp) Two new members were inducted into the Command and General Staff College International Hall of Fame in a ceremony Oct. 3, 2019, in the Lewis and Clark Center’s Eisenhower Auditorium. Their portraits now hang in the IHOF hallway alongside 283 other inductees representing 75 different nations. 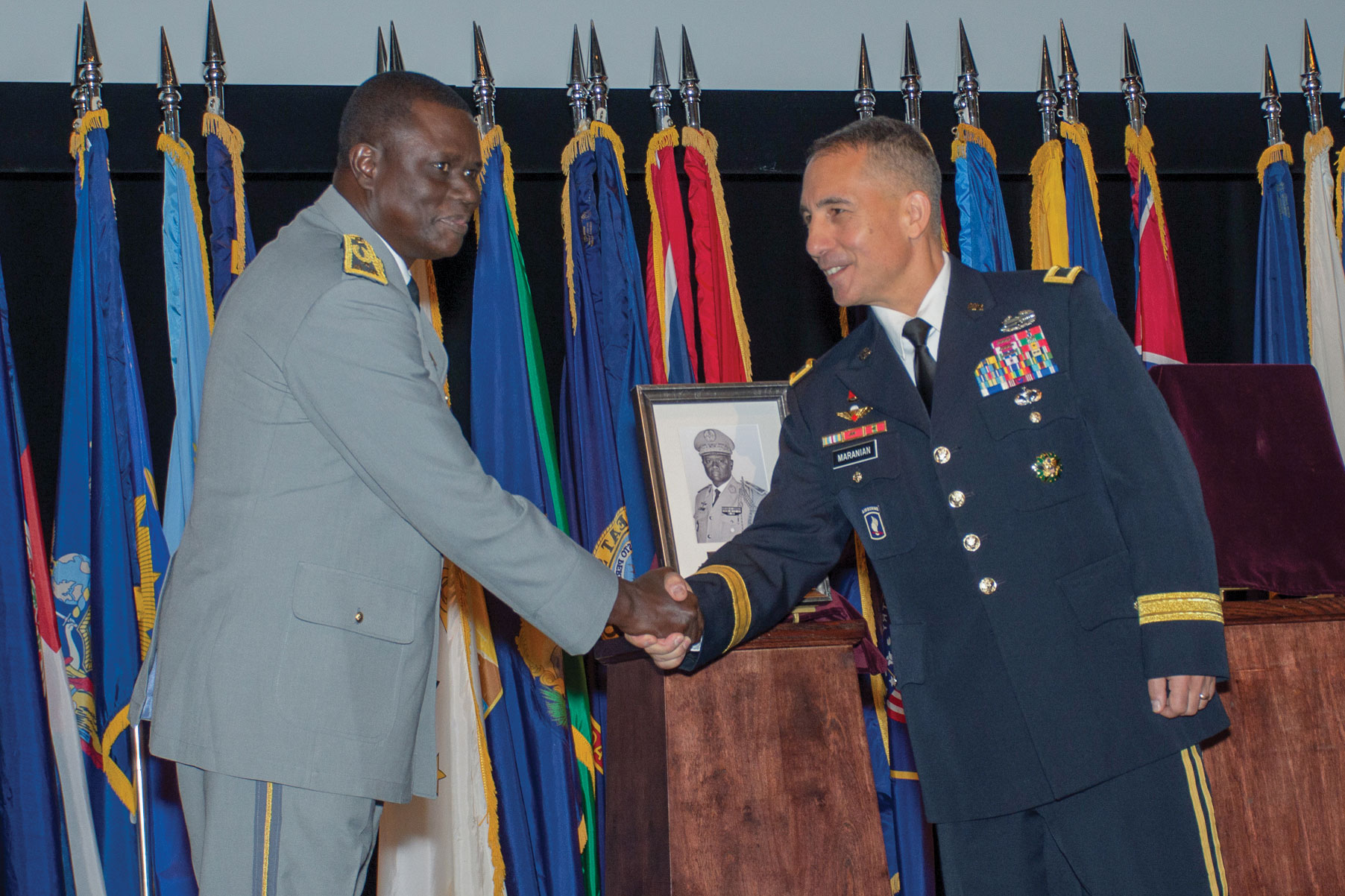 “Each (IHOF member) became eligible for this recognition through years of distinguished service to their nation, rising to the highest positions of uniformed leadership within their home military,” said Brig. Gen. Stephen Maranian, CGSC deputy commandant and Army University provost. “International participation in the Command and General Staff Officer Course is an important and integral part of the Leavenworth experience. … Our international students share their diverse cultures and experiences throughout the year making all of us better at our profession. Today’s inductees are proof of the quality of our international graduates.”

Ndiaye joined the Senegalese Army as a cadet at the Meknes Royal Military Academy in Morocco in July 1980. Throughout his career he has held assignments as platoon commander, company commander and garrison commander for various companies, battalions and brigades.

From May 2007 to July 2009, Ndiaye was the chief military liaison and planning officer of the United Nations Mission in the Central African Republic and Chad. From January 2012 to July 2014, he served as senior military adviser at the U.N. Office for Central Africa. In April 2016, he was promoted to brigadier general and appointed chief of staff of the Senegalese Army. Currently, he is serving as the inspector general of the Senegalese Armed Forces.

Ndiaye is the 284th IHOF inductee and the third from his nation.

“General Ndiaye is an excellent example of his nation’s commitment to cooperative military education and training,” Maranian said. “He has demonstrated his continued commitment to education and learning as a Ph.D. candidate in the study of public law.”

Ndiaye said he is proud of the education he received at CGSC.

“Twenty-five years later, the world has changed. In fact, it is a whole new world with its complex strengths and challenges. The future will not be what we expected, but it still expects a lot of us,” Ndiaye said. “Fortunately, the huge replica of the lamp is still outside as a beacon light of future understanding and sharing a common vision for long life friendships.

“I want to wish good luck for a bright future to the CGSC class (2020) participants,” he said. “I’m not asking you to fix all the problems on this planet. I’m just asking you to do whatever you can for your country and make the best of the best year of your life.”

During his 36 years of service, Smart held various command and staff appointments at the strategic, operational and tactical levels. While a colonel, he served as the director of Defence Transformation and Integration Secretariat and was the Defence Force military liaison officer advising the Minister of National Security. 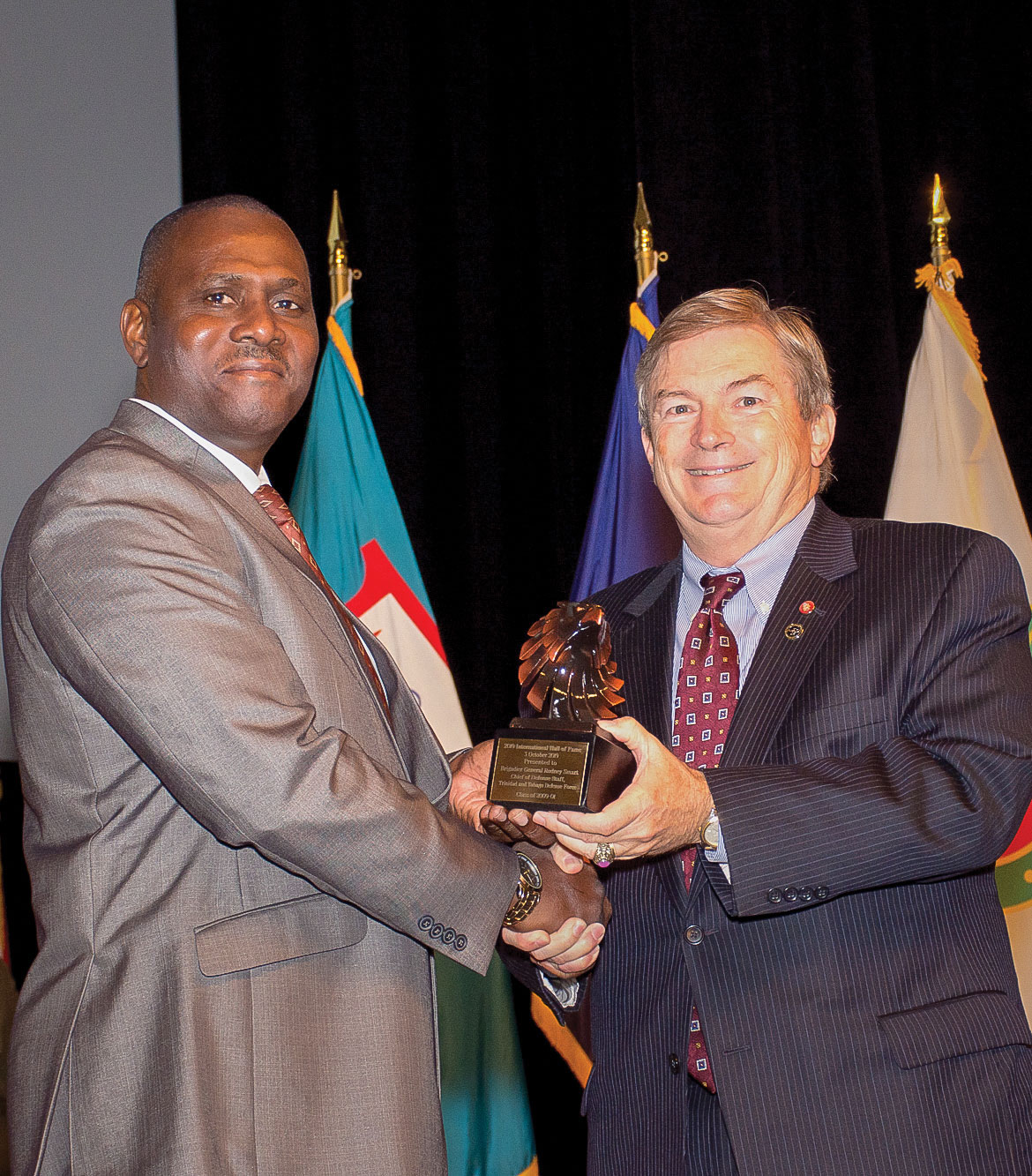 After unveiling his International Hall of Fame portrait, IHOF inductee retired Maj. Gen. Rodney Smart, former chief of Defence Staff of the Trinidad and Tobago Defence Force, receives an eagle statuette gift from Michael Hockley, chairman of the board of the Command and General Staff College Foundation, during his IHOF induction ceremony Oct. 3, 2019, at the Lewis and Clark Center.

Smart retired from the Trinidad and Tobago Defence Force in 2017 as the chief of Defence Staff, the nation’s senior military adviser to the president as well as the Minister of National Security on matters of national defense and security. Currently, he serves as chief executive officer of the Office of Disaster Preparedness and Management. He previously served as CEO of ODPM from 2010 to 2011.

Smart is the 285th IHOF inductee and the sixth from his nation.

“We are proud of (Smart’s) service and accomplishments and the role he has taken in the strong hemispheric ties we enjoy between our two countries,” Maranian said.

Smart said he is the officer he is today because of CGSC.

“I wish to say thank you for the wonderful work that you are doing here at CGSC in the leadership development of our armed forces and the peace and stability throughout the world,” Smart said. “To you students of this wonderful college, I wish to congratulate you on your accomplishments thus far. Appreciate where you are on your journey even if it is not where you would like to be at this time. For every single season has its purpose. … You are certainly on course to achieve greater things. Know that this year is going to sharpen your strategic and critical-thinking skills as well as your ability to implement.

“I want to assure you that while the education you receive here is going to prepare you for excellence at warfighting, you are simultaneously receiving an education that has multiple applications,” he said. “You are therefore being developed with a wide range of competencies … which will enable you to successfully lead any undertaking that you will decide to accomplish.”

Smart said CGSC is a critical point in an officer’s career and personal development.

“As we sit on the cusp of the third decade of the 21st century, know that you are not here by chance, but you belong to a generation of officers who have been selected by some higher power to solve the problems that my generation of officers and the ones before me could not solve,” Smart said. “Know that the solutions are there and all those solutions are doing is waiting for one of you here to come and collect because you have the ability to go beyond where we could not go.”

During their induction, the honorees were presented with a Certificate of Honor from Maranian and an eagle statuette from the CGSC Foundation.

The IHOF was established in 1973 by CGSC, the Kansas City Chapter of the Military Order of World Wars, and the then-CGSC Alumni Association, now the CGSC Foundation. Induction into the IHOF is for international graduates of the Command and General Staff Officer Course who have attained one of the highest positions of military importance in their country’s armed forces through military merit.

The 285 current inductees are out of more than 8,300 international CGSOC graduates from 165 countries since 1894.