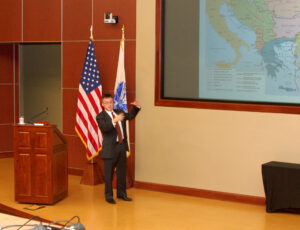 Dr. David R. Stone, a history professor at Kansas State University and a professor on the faculty of the U.S. Naval War College’s Department of Strategy and Policy, presented a lecture entitled “The Great War in the East” in the evening of Nov. 3, in the Marshall Auditorium of CGSC’s Lewis and Clark Center.

Stone’s presentation focused on the battles of the Russian Army during the war and their effects on the outcomes for both the war and for Russia after the war ended. This presentation was presented as the fifth lecture in the General of the Armies John J. Pershing Great War Centennial Series of lectures presented by CGSC’s Department of Military History with support from the CGSC Foundation. The Foundation’s primary sponsor for this lecture was the Lockheed Martin Corporation.

Dr. David R. Stone earned his Ph.D. in history from Yale University in 1997. He began teaching at Kansas State University in 1999, and now serves in the Strategy and Policy Department at the U.S. Naval War College. At Kansas State, he won the Presidential Award for Excellence in Undergraduate Teaching and served as the Director of the Institute for Military History which oversees interdisciplinary M.A. and Ph.D. programs in Security Studies. His three books include Hammer and Rifle:  the Militarization of the Soviet Union, 1926-1933, which won book prizes from both the Historical Society and the Association for Slavic, East European, and Eurasian Studies. Most recently, he published The Russian Army in the Great War: The Eastern Front, 1914-1917.

The sixth lecture in the series is scheduled for March 9, 2016 and will be presented by Dr. Richard Faulkner from CGSC’s Department of Military History. Dr. Faulkner will present a lecture entitled “Verdun: The Bleeding of Nations.” The lecture will be conducted in the Marshall Auditorium of the Lewis and Clark Center on Fort Leavenworth with a reception at 5:30 p.m. and the presentation beginning at 6 p.m.

The CGSC Department of Military History hosts the General of the Armies John J. Pershing Great War Centennial Series with support from the CGSC Foundation. The lecture series intended to foster understanding of this world-changing conflict during its 100-year commemoration. All lectures in the series are free and open to the public.