In June the Government Accountability Office (GAO) released a report reviewing collaborative efforts among the Department of Homeland Security (DHS), U.S. Customs and Border Protection (CBP), and other interagency partners along the U.S. southwest border. The report, GAO-14-494, describes how DHS uses collaborative mechanisms in Arizona and South Texas to coordinate border security efforts. The report also examines the extent to which DHS has established performance measures and reporting processes and how, if at all, DHS has assessed and monitored the effectiveness of the collaborative mechanisms in Arizona and South Texas.

GAO reports that the collaborative mechanisms used by DHS in Arizona and South Texas include the Joint Field Command, the Alliance to Combat Transnational Threats, and the South Texas Campaign. These mechanisms aided and enabled DHS and CBP in coordinating various border security efforts, including information sharing, resource targeting and prioritization, and leveraging of assets. For example, the Joint Force Campaign maintains an operations coordination center and clearing house for intelligence information, an asset in coordinating information sharing, while interagency partners target individuals and criminal organizations through the Alliance to Combat Transnational Threats. The South Texas Campaign leverages assets of CBP and interagency partners through resource distribution and by conducting joint operations.

GAO also found that DHS and CBP have established performance standards and reporting processes for the Joint Field Command, the Alliance to Combat Transnational Threats, and the South Texas Campaign. However, GAO believes there are opportunities to strengthen these collaborative mechanisms. GAO suggests that the collaborative mechanisms can be strengthened through assessing results across the efforts and establishing written agreements. 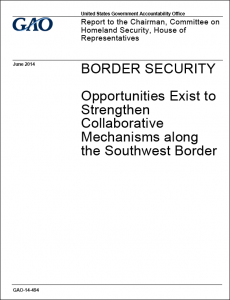 For more information about GAO-14-494, please follow the link below.
GAO-14-494, Border Security: Opportunities Exist to Strengthen Collaborative Mechanisms along the Southwest Border