Earlier this year, the Australian Civil-Military Centre (ACMC) released the follow up report from the 8th International Lessons Learned Conference, which was co-hosted by ACMC and Headquarters Joint Operations Command. The conference was held in December 2012 in Sydney, Australia. The report is based on formal and informal feedback and comments received both during and after the conference.

The overarching theme for the 2012 conference was “transitions,” including the complexity of multi-agency operations and future cooperation. The conference incorporated lessons from more than 200 experts and practitioners from over 30 countries and a wide variety of organizational backgrounds and cultures. The conference was divided into five broad areas: multi-jurisdictional responses to complex emergencies; stabilization and reconstruction; peacekeeping, peacemaking and peacebuilding; counterinsurgency; and novel evaluation techniques and evolving lessons capability.

The goal of the conference was to promote best practice in international lessons learned by bringing together civil, military, and police professionals, as well as scholars from around the world to contribute. Conference participants shared lessons and best practices from a variety of civilian, military, police and civil-military missions and operations worldwide. Participants also shared methods, processes and tools used to identify, apply and share lessons learned and best practices.

On a related note, the Simons Center was pleased to visit with ACMC’s Founding Executive Director on November 12. Major General (Retd) Michael G. Smith, AO, is currently a Visiting Fellow at the Asia-Pacific College of Diplomacy at the Australian National University, and an Adjunct Professor at the Key Centre for Ethics, Governance and Law at Griffith University in Australia. He served as the Founding Executive Director of ACMC from 2008 to 2011. 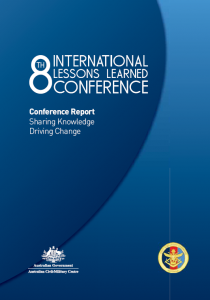