The Department of Homeland Security recently announced the release of the National Cyber Incident Response Plan (NCIRP). The updated NCIRP was released in December 2016. DHS had previously spoke of the coming update earlier in the year, as the NCIRP had not been updated for six years..

In a statement released today, DHS Secretary Jeh Johnson said the NCIRP was “a critical step toward further strengthening the nation’s cybersecurity efforts.” According to Johnson, the NCIRP is guided by Presidential Policy Directive (PPD) 41, United States Cyber Incident Coordination, which established principals to govern the federal government’s actions in response to significant cyber incidents.

“The National Cyber Incident Response Plan is not a tactical or operational plan for responding to cyber incidents,” said Johnson. “However, it serves as the primary strategic framework for stakeholders when developing agency, sector, and organization-specific operational and coordination plans.”

Johnson also remarked that the update of the NCIRP was made possible through coordination with interagency, private sector, and state and local partners. 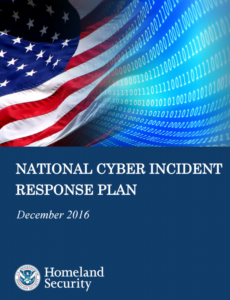